Arsenal take on Standard Liege on Thursday night. Here is the side Gooner Mac thinks Ljungberg will select for the game:

Arsenal will look to secure top spot in their Europa League group with a win over Standard Liege on Thursday night. Here is the side Gooner Mac thinks Ljungberg will select for the game:

Goalkeeper: Bernd Leno will be given a rest with Emi Martinez set to come back in between the sticks as he’s kept goal throughout the Europa League campaign.

Defence: Ljungberg is expected to make changes ahead of Sunday’s Premier League clash with Manchester City but his options in defence have been decimated by a number of injury problems.

Arsenal confirmed today that Kieran Tierney is facing a spell on the sidelines after dislocating his shoulder during the win over West Ham so Freddie is unlikely to risk Sead Kolasinac tomorrow night. That could mean youngster Tolaji Bola is given a chance to impress at left-back.

Hector Bellerin has been ruled out of the trip to Belgium after picking up a hamstring injury during the warm-up ahead of Monday’s game at the London Stadium. The injury isn’t serious and he could return against City on Sunday so Ainsley Maitland-Niles is likely to start at right-back on Thursday.

Rob Holding is still two weeks away from returning to full training due to a knee injury so we could see David Luiz and Shkodran Mustafi recalled in the middle of the back four with Calum Chambers and Sokratis making way.

Midfield: Arsenal have been dealt another blow with the news that Granit Xhaka will miss at least the next two games after suffering concussion against West Ham while Dani Ceballos remains out with a hamstring injury.

Joe Willock is expected to be recalled against Liege while Matteo Guendouzi is also likely to come into the side after being named on the bench against West Ham last time out.

Attack: Pierre-Emerick Aubameyang and Mesut Ozil are expected to be rested for the trip to Belgium while Nicolas Pepe has been ruled out after suffering a minor knee injury during his MOTM display against West Ham so we’ll see plenty of changes in attack.

Gabriel Martinelli continued to impress on his first Premier League start so I think he’ll be given a breather ahead of the City game with Bukayo Saka coming in on the left wing tomorrow night.

Alexandre Lacazette could also be recalled up front after not featuring against the Hammers while youngsters Reiss Nelson and Emile Smith Rowe may get chances to impress in the Arsenal starting eleven against Liege. 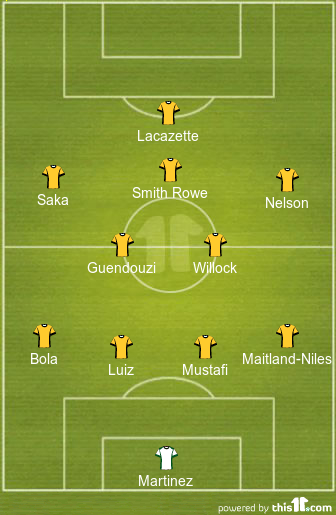