Arsenal take on Manchester City at the Emirates on Sunday afternoon. Here is the side Gooner Mac thinks Ljungberg will select for the game:

Arsenal take on Manchester City at the Emirates on Sunday afternoon. Here is the side Gooner Mac thinks Ljungberg will select for the game:

Goalkeeper: Emi Martinez kept goal for the 2-2 draw with Standard Liege in the Europa League but Bernd Leno is set for a recall against City this weekend.

Defence: Ljungberg went with a back three on Thursday night but it didn’t work so the interim Arsenal boss is likely to revert to a flat back four against Man City on Sunday afternoon.

However, Ljungberg has plenty of injury concerns as Kieran Tierney has been ruled out for up to three months after dislocating his shoulder against West Ham on Monday while Rob Holding remains out with a knee problem.

Hector Bellerin will require a late fitness test on a hamstring problem but there is hope he’ll be fit. Ainsley Maitland-Niles is on stand-by to start at right-back if Bellerin is ruled out while Sead Kolasinac will start on the left.

Calum Chambers put in a solid show against West Ham alongside Sokratis so they could form a partnership in the middle of Arsenal’s defence this weekend with David Luiz and Kostas Mavropanos making way.

Midfield: Arsenal have limited options in midfield as Granit Xhaka has been ruled out with concussion while Dani Ceballos remains on the sidelines with an on-going hamstring injury that’s kept him out for the past month.

Matteo Guendouzi is expected to keep his place while Lucas Torreira is almost certain to start after being given the night off against Standard Liege on Thursday evening. Joe Willock is likely to make way after putting in a disappointing show in Belgium.

Attack: There should be changes in the Arsenal attack as Pierre-Emerick Aubameyang will be recalled after being named on the bench on Thursday and the Gabon hitman will be the hosts main goal threat.

Ljungberg made the big decision to drop Alexandre Lacazette versus West Ham and it looks like the Frenchman will drop back to the bench to make room for Auba despite scoring against Liege last time out.

Nicolas Pepe requires a late fitness check after missing the trip to Belgium with a minor knee injury but hopefully the Ivorian is fit to start as he was excellent against West Ham and is just starting to find some form.

Reiss Nelson will be the man to make way if Pepe is fit while Bukayo Saka will hope he did enough to keep his place after scoring and grabbing an an assist against Liege on Thursday. However, I think Gabriel Martinelli will be the man to start on the left side of the Arsenal attack.

Youngster Emile Smith Rowe put in an encouraging display in the Europa League but Mesut Ozil is expected to be recalled on Sunday after being rested for the trip to Liege. 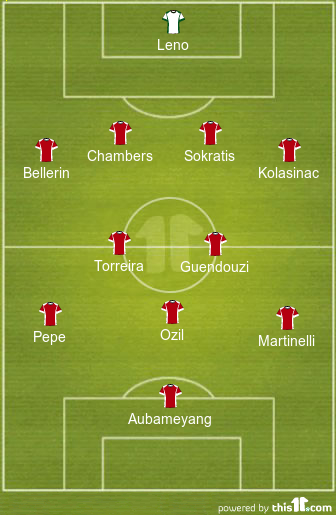