Arsenal, Manchester United and Wolves have learned their fate after the draw for the last-32 of the Europa League was made in Switzerland this afternoon.

Arsenal, Manchester United and Wolves have learned their fate after the draw for the last-32 of the Europa League was made in Switzerland this afternoon.

Arsenal made hard work of what was a relatively straight forward group. The Gunners won their opening three games but drew in Vitoria before losing at home to Eintracht Frankfurt meaning they needed a win in their final Group F game to guarantee progression as winners.

Freddie Ljungberg’s side came from 2-0 down to salvage a 2-2 draw against Standard Liege but managed to sneak through as group winners after Eintracht Frankfurt conceded two late goals to lose at home to Vitoria.

Arsenal have now been handed a tricky draw after being paired with Olympiacos in the last-32 phase. The Greek side dropped down from the Champions League after finishing third behind Bayern Munich and Tottenham in the group stages and Arsenal have lost 4 of their previous 8 meetings with them.

Manchester United went into their final Group L game needing to avoid defeat to secure their place in the draw as group winners and they made light work of AZ Alkmaar after thrashing the Dutch side 4-0 at Old Trafford last week.

Ole Gunnar Solskjaer’s side have been handed a favourable draw as they’ll now face Club Brugge in the last-32. The Belgium side crashed out of the Champions League after finishing third in the group stage behind PSG and Real Madrid.

Wolves were also in today’s draw after finishing second in their group and they’ve been pitted against La Liga outfit Espanyol in the first knockout phase.

Scotland also still has two representatives in the Europa League as Rangers and Celtic both made it out of their groups. Rangers will now face Braga while Celtic will take on Copenhagen.

The first legs will be played on February 20 with the return legs on the 27th. Here are some of the main games from today’s draw: 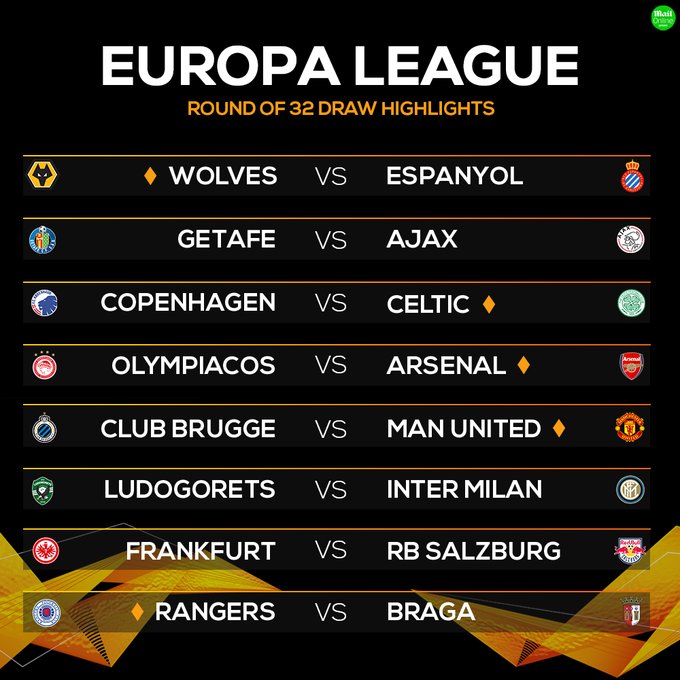