Manchester United take on Burnley at Turf Moor on Saturday night. Here is the team we think Ole Gunnar Solskjaer will select for the game:

Manchester United will look to close-in on the top four with a win over Burnley at Turf Moor on Saturday night [7.45pm kick-off]. Here is the team we think Ole Gunnar Solskjaer will select for the game:

Goalkeeper: David De Gea recovered from his error against Watford to put in a far better performance against Newcastle and he’ll keep his place in goal tomorrow.

Defence: Solskjaer has played the same back four in the last two games so he may freshen things up against Burnley. Ashley Young or Brandon Williams could be recalled at left-back with Luke Shaw given a rest.

However, I don’t think the United boss will want to change things too much so I think we’ll see Aaron Wan-Bissaka, Harry Maguire and Victor Lindelof all keeping their places unless any of them picked up a knock on Boxing Day.

Midfield: United will be forced into a change in midfield as Scott McTominay is facing a spell on the sidelines after suffering a knee injury against Newcastle United. Nemanja Matic could be an option for Solskjaer but I think it’s more likely we’ll see Paul Pogba recalled this weekend.

The Frenchman has looked sharp in his two substitute appearances since returning from injury and he’ll be a big addition to the team at Turf Moor tomorrow evening. Pogba is expected to line-up alongside Fred in the middle of the park.

We could see another change in the attacking midfield position with Andreas Pereira dropping out. Juan Mata is an option but I think Solskjaer will opt to recall Jesse Lingard against Burnley.

Attack: Man Utd smashed four past Newcastle so Solskjaer will be reluctant to change things too much in attack. Mason Greenwood made another impressive goal-scoring display but I think we might see Daniel James recalled on the wing.

Anthony Martial was back among the goals last time out and he should continue to lead the line up front with Marcus Rashford offering support in attack. 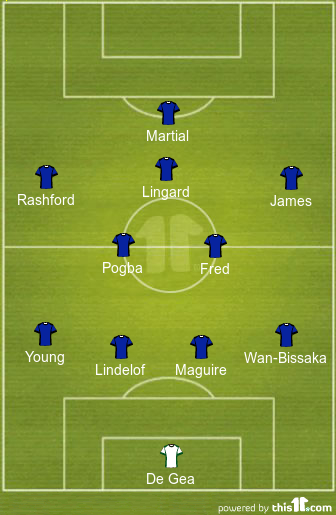