Goalkeeper: Bernd Leno was badly at fault for the Chelsea equaliser on Sunday but he’s still certain to keep his place between the sticks so Emi Martinez will be on the bench.

Defence: Arsenal are sweating over the fitness of Calum Chambers after he limped out of the defeat to Chelsea with a suspected knee ligament injury. The full extent isn’t known but he’s certain to miss the Man Utd game so Sokratis should come back into the side if he’s deemed fit following concussion.

David Luiz will keep his place in the middle of the back four while Bukayo Saka will continue at left-back in the continued absence of Sead Kolasinac and Kieran Tierney – who remain out due to injury.

Hector Bellerin has been back in training after recovering from a hamstring injury that’s kept him out for the past month so the Spaniard could be in-line to make his comeback at right-back with Ainsley Maitland-Niles making way.

Midfield: It will be interesting to see whether Granit Xhaka returns to the Arsenal squad after missing the Chelsea game. The official line is the midfielder was ‘ill’ but Xhaka is being heavily tipped for a move to Hertha Berlin so I’d be surprised to see him starting tomorrow.

Lucas Torreira is expected to keep his place after impressing in recent games while Matteo Guendouzi should also start ahead of Joe Willock. Dani Ceballos could return to the squad after recovering from a hamstring injury but a place on the bench is the best he can hope for due to a lack of match fitness.

Attack: Mesut Ozil impressed again at the weekend so he should continue in the attacking midfield position against Man Utd but we could see Arteta freshen things up elsewhere during the busy festive period.

Reiss Nelson has started the last three games so he may be rested with Nicolas Pepe pushing for a recall on the right-wing while Gabriel Martinelli could come back into the Arsenal side if he passes a late fitness test.

Alexandre Lacazette has been struggling for form lately so he could drop out with Pierre-Emerick Aubameyang moving into a more central position if Martinelli is recalled on the left wing. 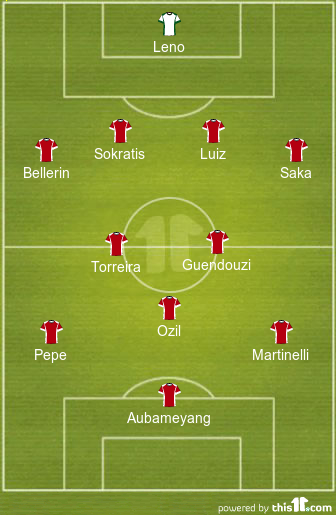