Man Utd take on Man City in the first leg of their Carabao Cup semi-final on Tuesday. Here is the team we think Ole Gunnar Solskjaer will select

Manchester United take on Manchester City at Old Trafford in the first leg of their Carabao Cup semi-final on Tuesday evening. Here is the team we think Ole Gunnar Solskjaer will select for the game:

Goalkeeper: Sergio Romero has kept goal in the previous three rounds of the Carabao Cup but Solskjaer refused to confirm whether he’d keep his place in the semi’s so I wouldn’t be surprised to see David De Gea given the nod after Romero played against Wolves in the FA Cup at the weekend.

Defence: Man Utd will need to assess Harry Maguire after he picked up a knock at the weekend but the defender is expected to be passed fit to start alongside Victor Lindelof tomorrow night meaning Phil Jones will once again be on the bench.

Luke Shaw should be recalled at left-back if he’s able to prove his fitness after missing the Wolves game due to illness while Aaron Wan-Bissaka will come in at right-back after he was rested at the weekend with Ashley Young making way.

Midfield: Manchester United will continue to be without Paul Pogba after he was ruled out for another month following ankle surgery while Scott McTominay is also still on the sidelines with an ankle injury.

Andreas Pereira played in a deeper midfield role during the draw with Wovles at the weekend but I expect him to make way with Fred recalled in the middle of the park after he was rested on Saturday afternoon.

Nemanja Matic should keep his place in the holding role as James Garner and Dylan Levitt aren’t fit enough to start just yet so Solskjaer doesn’t have too many other options to freshen things up.

Juan Mata started in the advanced midfield role at Molineux but I think we’ll see Jesse Lingard given a recall to the starting eleven against Manchester City tomorrow night as long as he’s able to shake-off a cold.

Attack: United will assess Anthony Martial after he missed the draw with Wolves due to illness but the Frenchman is being tipped to return up front meaning Mason Greenwood will drop to the bench.

Marcus Rashford is almost certain to be recalled in the Man Utd attack after he was named on the bench at the weekend. Tahith Chong will drop out but I think Daniel James will keep his place on the wing. 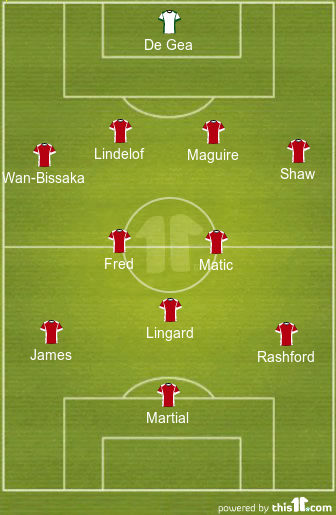