Arsenal, Manchester United and Tottenham are ready to battle it out over the signing of out-of-favour Barcelona centre-back Samuel Umtiti 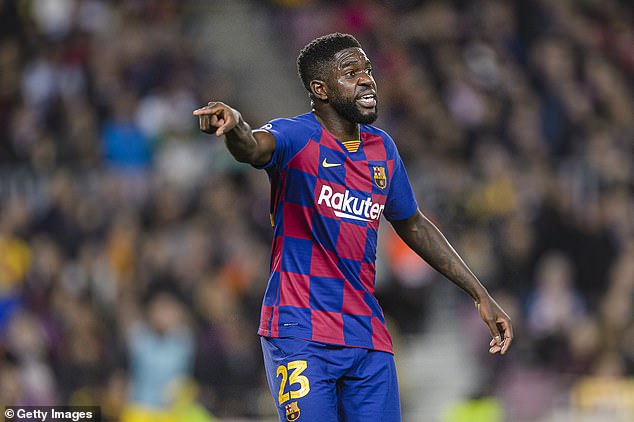 Arsenal, Manchester United and Tottenham are ready to battle it out over the signing of out-of-favour Barcelona centre-back Samuel Umtiti, according to reports via the Daily Mail.

Umtiti was once considered to be one of the most exciting young defenders in European football but he’s struggled with various knee and ankle injuries since joining Barcelona from Lyon in a £21million deal three and a half years ago.

The 26-year-old has lost his place in Ernesto Valverde’s starting eleven having made just four La Liga starts this season with the Barca boss preferring Clement Lenglet alongside Gerard Pique in the middle of his back four.

Umtiti is currently fully fit but the Daily Mail are citing a report from El Desmarque that claims Barcelona fear his injury problems have hampered his progress so they are now willing to cash-in if a suitable offer arrives.

The Spanish outlet says there is significant interest from the Premier League with Arsenal, Manchester United and Tottenham ‘pushing hard’ to sign Umtiti with the trio all weighing-up formal offers.

Arsenal have continued to struggle defensively this season with Shkodran Mustafi, Sokratis and David Luiz all enduring indifferent campaigns while Calum Chambers has been ruled out for up to nine months with a knee ligament injury.

Mikel Arteta is going to have to revamp his newly-inherited squad if he wants to turn Arsenal back into challengers again any time soon and it appears the Gunners are now eyeing a swoop to sign Umtiti.

However, Man Utd are also reportedly on the market for defensive reinforcements after losing Harry Maguire to injury and Ole Gunnar Solskjaer could be lining-up Umtiti as a potential upgrade on Phil Jones and Marcos Rojo.

Tottenham, meanwhile, are also being linked with a move for the French international as Jose Mourinho looks to sign a long-term replacement for Jan Vertonghen – who’s yet to sign a new contract – so it looks like there could be a three-way battle to lure Umtiti to England.

The former Lyon star has the ability to be a top player when he’s full fit and he played the full ninety minutes to help France win the World Cup final against Croatia in 2018 so I think he’d be a great signing if Arsenal, United or Spurs were able to get a deal agreed.