Goalkeeper: There is no point spending too much time deliberating over who’ll start in goal for Chelsea as Kepa Arrizabalaga is certain to keep his place with Willy Caballero on the bench once again.

Defence: Reece James is a doubt after picking up a knee injury during the defeat at Newcastle on Saturday. The youngster will be given a late fitness test but Lampard is unlikely to take any risks so Cesar Azpilicueta could move to right-back with Emerson Palmeiri recalled at left-back.

The Chelsea boss may be tempted to make another change to his defence as Kurt Zouma is pushing for a recall after being named on the bench at the weekend. Andreas Christensen is the man most likely to drop out if Zouma is recalled as Antonio Rudiger should keep his place in the back four.

Midfield: N’Golo Kante came through the Newcastle game unscathed after recovering from a knock so he should keep his place against Arsenal tomorrow evening while Jorginho should also retain his position in the deep lying playmaker role.

However, we may see Lampard freshen things up in midfield with Mateo Kovacic and Ross Barkley pushing for recalls. Mason Mount is the player most in danger of dropping to the bench and I think he’ll be replaced by Kovacic tomorrow evening.

Attack: Christian Pulisic remains on the sidelines as he’s still recovering from a groin injury so Callum Hudson-Odoi should retain his place in the Chelsea attack while Willian is favourite to start ahead of Pedro.

Tammy Abraham will lead the line up front against Arsenal so Michy Batshuayi will have to settle for a place among the substitutes. Olivier Giroud is unlikely to be involved against his former club as he continues to discuss a move away from Chelsea this month. 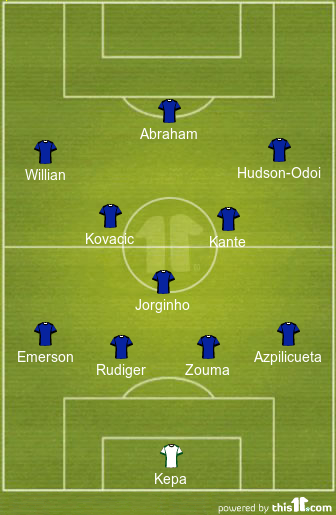