Chelsea take on Leicester City at the King Power Stadium on Saturday afternoon. Here is the team we expect Frank Lampard to select for the game:

Chelsea take on Leicester City at the King Power Stadium on Saturday afternoon. Here is the team we expect Frank Lampard to select for the game:

Goalkeeper: Kepa Arrizabalaga is set for a recall after being rested for the FA Cup win over Hull City last week. Willy Caballero will drop back to the bench.

Defence: Chelsea are expected to make several changes in defence as Antonio Rudiger and Andreas Christensen are set for recalls after being rested last time out. Fikayo Tomori and Kurt Zouma could therefore find themselves back on the bench tomorrow.

Reece James should return at right-back after shaking off a knock so Cesar Azpilicueta could move over to left-back with Marcos Alonso making way. Emerson Palmeiri is likely to find himself battling for a place on the bench.

Midfield: Lampard will make changes in midfield as Jorginho and N’Golo Kante should be recalled. The key duo were rested against Hull in the FA Cup but should be restored in the middle of the park at Leicester.

Mateo Kovacic is likely to keep his place so Ross Barkley is set to drop out while Mason Mount may also find himself named among the substitutes at the King Power.

Attack: Tammy Abraham was able to train today but the striker is still feeling pain in his ankle so he’ll be given a late fitness test after missing Chelsea’s last three matches.

However, I’m not sure Lampard will risk Abraham from the start tomorrow so Michy Batshuayi should continue to lead the line up front. Olivier Giroud looks set to remain at Chelsea until the end of the season [unless he secures a late move tonight] so he could be on the bench this weekend.

Christian Pulisic remains on the sidelines as he’s still recovering from a groin injury so Callum Hudson-Odoi should keep his place in the Chelsea attack while Willian will be recalled in place of Pedro. 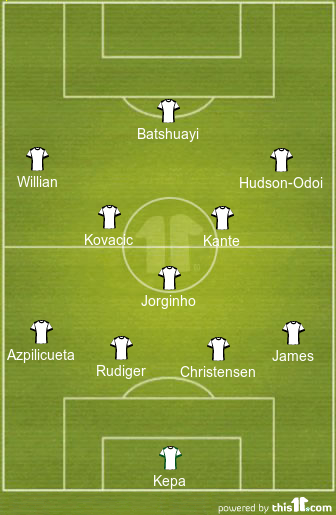