Arsenal take on Newcastle United at the Emirates on Sunday afternoon. Here is the team Gooner Mac expects Mikel Arteta to select:

Arsenal return from the winter break when they take on Newcastle United at the Emirates on Sunday afternoon. Here is the team Gooner Mac expects Mikel Arteta to select:

Goalkeeper: Arsenal No.1 Bernd Leno will keep his place between the sticks this weekend with Emi Martinez on the bench.

Defence: Arteta has been handed a boost in defence as Sead Kolasinac is fit to return after missing the last four games with a thigh injury. Bukayo Saka – who’s been filling-in at left-back in recent weeks – is also available after recovering from a knock that he picked up at Burnley but Kolasinac may get the nod on Sunday.

Pablo Mari isn’t ready to make his debut just yet as he’s not played since December so won’t be in contention this weekend while fellow new recruit Cedric Soares is still working his way back from a knee injury.

Shkodran Mustafi started during the 0-0 draw at Burnley but Sokratis is pushing for a recall so he could line-up alongside David Luiz in the middle of the Arsenal back four.

Hector Bellerin is fully fit so he should retain his place at right-back with Ainsley Maitland-Niles missing out but Calum Chambers and Kieran Tierney remain on the sidelines.

Midfield: Arsenal are likely to make a change in midfield with Lucas Torreira recalled to start against Newcastle after being named on the bench during the draw at Burnley last time out.

Matteo Guendouzi is the man expected to make way as Granit Xhaka will keep his place in the Arsenal midfield. Dani Ceballos is another option for Arteta and he’s pushing for a recall after returning to full fitness, however, I think the Spaniard will have to settle for a place on the bench along with Joe Willock.

Attack: Arsenal went with Gabriel Martinelli on the right wing against Burnley but he wasn’t as effective as he’s been on the left. The Brazilian deserves to keep his place so I wouldn’t be surprised to see Martinelli moved to the left with Pierre-Emerick Aubameyang deployed through the middle.

Alexandre Lacazette has struggled for goals lately and looks low on confidence. Aubameyang is our main striker so we’d be more balanced with Martinelli on the left and Auba up front.

That would allow Nicolas Pepe to be recalled on the right wing. Reiss Nelson is also an option after recovering from a hamstring injury but Pepe could get the nod at home to Newcastle.

Mesut Ozil was very disappointing against Burnley and we need more from our main playmaker. We’re not creating enough chances to the pressure is on Ozil to make things happen. 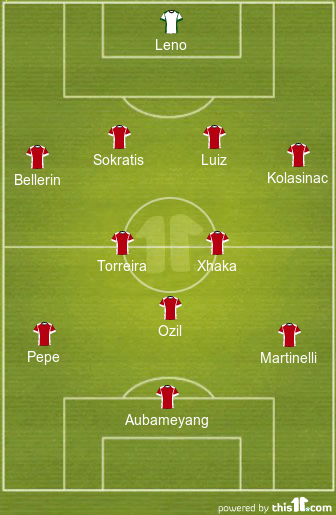