Manchester United take on Chelsea at Stamford Bridge on Monday night. Here is the team we think Ole Gunnar Solskjaer will select for the game:

Manchester United take on Chelsea at Stamford Bridge on Monday night. Here is the team we think Ole Gunnar Solskjaer will select for the game:

Goalkeeper: I don’t think there any any need to deliberate for too long over who’ll start in goal for Man Utd as David De Gea is certain to keep his place with Sergio Romero on the bench.

Defence: Solskjaer may make one change to the back four that started during the 0-0 draw with Wolves two weeks ago as Brandon Williams is pushing for a recall. The youngster has impressed this season when he’s given a chance and I think he’ll come in for Luke Shaw at left-back against Chelsea.

Harry Maguire and Victor Lindelof are expected to keep their places in the middle of defence so Eric Bailly and Phil Jones will battle for places among the substitutes tomorrow while Aaron Wan-Bissaka will continue at right-back.

Midfield: Paul Pogba has been slowly working his way back from ankle surgery but the Frenchman is still not even back in full training yet so he won’t be involved for the foreseeable future.

Scott McTominay is closer to making his comeback from a knee ligament injury but this game comes too soon for the Scotsman. However, there is some good news for Solskjaer as Nemanja Matic returns from suspension.

The Serbian international is expected to be given an immediate recall to start alongside Fred in the middle of the park against Chelsea so Andreas Pereira will be the man to make way.

Bruno Fernandes impressed on his debut following his big-money move from Sporting Lisbon in January and the Portuguese star should keep his place in the attacking midfield role tomorrow night.

Attack: United completed the surprise signing of Odion Ighalo on deadline day but the striker has had limited time to train with his new team mates after being forced to train away from the main squad over the past two weeks.

Solskjaer says Ighalo will travel to London but he’s expected to be named on the bench rather than start. Therefore, Anthony Martial should continue to lead the line up front against Chelsea.

Man Utd could freshen things up in attack with Mason Greenwood pushing for a recall. The youngster could start on the wing with Marcus Rashford still recovering from a fractured back while Daniel James should keep his place out wide. 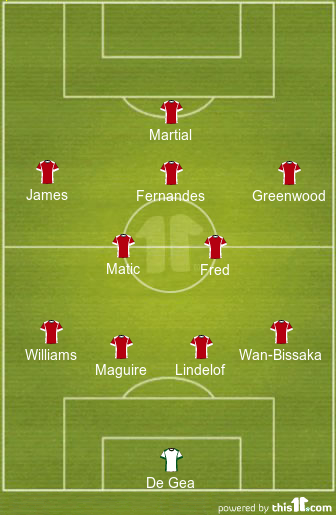