Chelsea take on Tottenham Hotspur at Stamford Bridge on Saturday afternoon. Here is the team we expect Frank Lampard to select for the game:

Chelsea take on Tottenham Hotspur at Stamford Bridge on Saturday afternoon. Here is the team we expect Frank Lampard to select for the game:

Goalkeeper: Kepa Arrizabalaga has been axed as Chelsea’s number one for the past two games and it looks like Willy Caballero will keep his place between the sticks against Spurs tomorrow.

Defence: Chelsea are expected to deploy a back four with Reece James keeping his place at right-back meaning Cesar Azpilicueta will play from the left side of the defence.

Lampard will make a late call over Andreas Christensen after he was forced off against Man Utd on Monday night with a broken nose. The centre-back has trained with a protective mask in recent days so he could keep his place alongside Antonio Rudiger.

Kurt Zouma and Fikayo Tomori are on stand-by to fill-in if Lampard decides Christensen isn’t ready to start against Tottenham on Saturday lunchtime.

Midfield: Chelsea have suffered a major blow with the news that N’Golo Kante has been ruled out for around three weeks with a muscle injury that he suffered against United last time out.

Jorginho and Mateo Kovacic will keep their places in the Chelsea midfield but it will be interesting to see how Lampard shapes up without Kante. Ross Barkley is available but I think it will be Mason Mount who comes in to start in the advanced midfield role.

Ruben Loftus-Cheek is set to return to the squad after building up his fitness in training recently. However, having been out for so long, the midfielder will only be named on the bench against Tottenham.

Attack: Chelsea are set to welcome Tammy Abraham back into the squad after he resumed full training following an ankle injury and he’s expected to replace Michy Batshuayi up front.

Callum Hudson-Odoi remains a doubt with a thigh injury that kept him out of the United game while Christian Pulisic is also still on the sidelines so Pedro could keep his place along with Willian in the Chelsea attack. 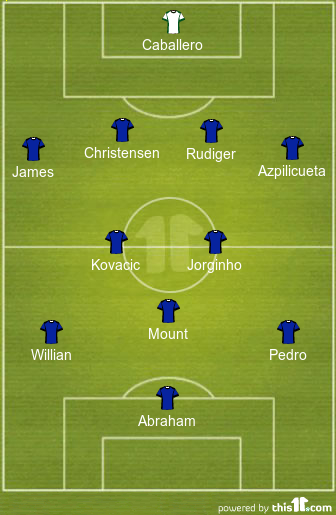