This is our match preview ahead of Arsenal’s Premier League clash with Everton including team news, line-ups and prediction

Arsenal get back to Premier League action when they take on Everton at the Emirates this afternoon.

The Gunners took control of their Europa League last-32 tie with Olympiacos after coming away with a vital 1-0 win from the first leg in Athens on Thursday night but the focus will be fully on league matters today.

A comfortable 4-0 victory over Newcastle United last week was Arsenal’s first win in five Premier League matches so Mikel Arteta will be hoping to build some momentum as the north Londoners look to make a late push for a Champions League qualification place.

Arsenal currently sit way down in 11th position in the table but they can climb up to eighth and move to within seven points of fourth-placed Chelsea – who beat Tottenham on Saturday – with a win this afternoon.

However, Everton also head to the capital with one eye on a top four place as victory for Carlo Ancelotti’s side would see them leapfrog Manchester United into seventh so it’s all to play for at the Emirates Stadium.

Arsenal are set to welcome Mesut Ozil back into the squad after he missed Thursday’s Europa League game against Olympiacos to attend the birth of his newborn baby. Lucas Torreira also missed the trip to Athens last week due to illness but the South American is back in full training so should return to the squad this afternoon.

Sokratis is a doubt after limping off against Olympiacos with a knee problem while Hector Bellerin will also need to be assessed after missing the game on Thursday with a tight groin.

Kieran Tierney is edging closer to making his comeback from shoulder surgery but for now he remains on the sidelines along with Calum Chambers and Cedric Soares.

Everton could have Andre Gomes available again after he recovered from an ankle injury but a place on the bench is probably the best he can hope for after so long on the treatment table.

Bernard is expected to shake-off a knock to start in attack but Theo Walcott is a major doubt with a knee issue and Fabian Delph is definitely out as he’s suspended. 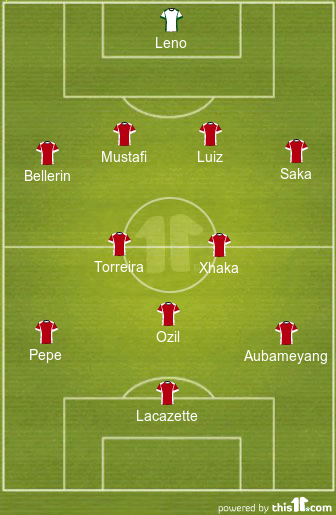 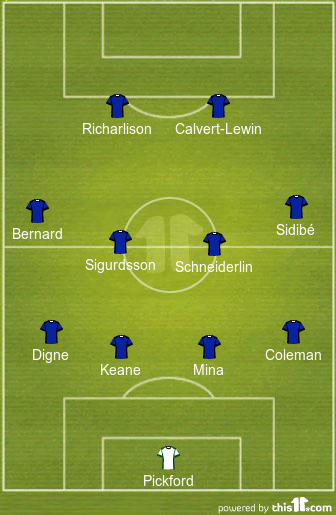 Arsenal 2-1 Everton: This has been an excellent fixture for Arsenal as they are unbeaten in their last 23 Premier League home games against Everton and the Gunners have won more top-flight games against the Toffees than any other side [97].

Arteta’s side are unbeaten in their last six league games and have kept three consecutive clean sheets so they finally look to be finding some form under their new manager. I expect an entertaining game and Everton are capable of causing some problems but I have a feeling Arsenal will just edge it.