Chelsea can tighten their grip on fourth place with a win when they take on Aston Villa at Villa Park on Sunday afternoon.

The Blues currently sit two points clear of Manchester United following the Red Devils’ 1-1 draw at Tottenham on Friday night so Frank Lampard’s men can extend their advantage to five points with a win tomorrow.

That would put Chelsea firmly in pole position to secure a Champions League qualification place with just eight games remaining so this is an opportunity the West Londoners won’t want to pass up.

However, it won’t be easy as Chelsea will be up against an Aston Villa side who are also desperate for points, but for entirely different reasons as they battle to secure their top flight status for another season.

The Villains head into the game sitting in the bottom three on 26 points from their 29 games so they’ll be hoping to climb out of the relegation zone with a win on Sunday afternoon.

Villa will hand a late fitness test to John McGinn after the midfielder completed 75 minutes during their 0-0 draw with Sheffield United on Wednesday night. It was his first appearance since December so boss Dean Smith doesn’t want to overload him too soon.

Frederic Guilbert is back in training following a knee injury but this game could come too soon while Bjorn Engels, Wesley and Tom Heaton are all still on the sidelines. Danny Drinkwater isn’t available due to the terms of his loan.

Chelsea will be without Fikayo Tomori as Lampard confirmed at his press conference that the defender is out with a muscle injury that he picked up in training while Callum Hudson-Odoi is lacking fitness so won’t be considered for this game.

N’Golo Kante is expected to start and Ruben Loftus-Cheek is back in contention but Jorginho is suspended after collecting 10 yellow cards this season. 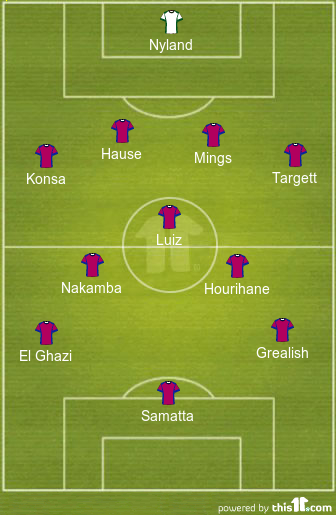 Aston Villa 1-2 Chelsea: The Blues have won nine of their last 10 Premier League games against Aston Villa and have won each of the last five meetings between the two sides so recent history is certainly pointing to an away win. Chelsea aren’t as tight as they used to be defensively but they have plenty of quality going forward and I think they’ll have too much for Villa in the end.

It should be a competitive game with both sides desperate for points, but I’m backing Chelsea to come out on top in a 2-1 win.