Gilmour could start when Chelsea take on Leicester City at the King Power on Sunday afternoon.

Chelsea take on Leicester City at the King Power on Sunday afternoon. Here is the team we expect Frank Lampard to select for the game:

Goalkeeper: Kepa Arrizabalaga is expected to keep his place between the sticks with Lampard resisting the temptation to play Willy Caballero now we’re in the business end of the FA Cup.

Defence: However, Chelsea could freshen things up in defence with Reece James pushing for a recall at right-back. That could see Cesar Azpilicueta switching to left-back with Marcos Alonso dropping to the bench.

Antonio Rudiger should keep his place in the middle of defence but Kurt Zouma could be given a recall after being left out for the last two matches. Andreas Christensen is the man most likely to make way.

Fikayo Tomori is set to miss out once again with a muscle problem but Emerson Palmeiri could return to the bench for the trip to Leicester tomorrow.

Midfield: Chelsea are being tipped to rotate in midfield with Jorginho set for a recall after being left on the bench for the win over Manchester City in midweek. N’Golo Kante could therefore be given a rest.

The Scottish teenager has broken into the Chelsea first team fold this season and could be given a chance to impress in the FA Cup with Mason Mount dropping out.

Attack: Olivier Giroud has started the last three matches so I expect him to be given a rest tomorrow with Tammy Abraham set for a recall up front and he’ll be desperate to take his opportunity.

Christian Pulisic should keep his place in the Chelsea attack after scoring a fine goal against City in midweek but we could see Pedro coming in for Willian on the opposite flank.

Callum Hudson-Odoi remains a doubt with an on-going ankle injury that’s kept him out recently but Ruben Loftus-Cheek is another option for Lampard from the bench. 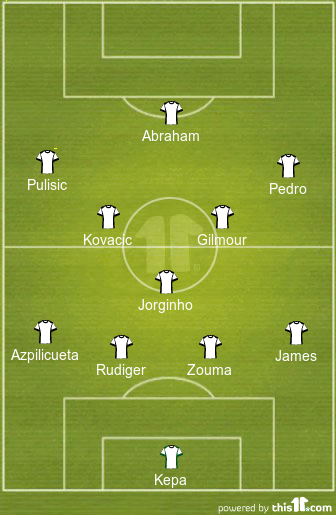