Arsenal take on Norwich City at the Emirates Stadium on Wednesday evening. Here is the team Gooner Mac expects Mikel Arteta to select:

Arsenal take on Norwich City at the Emirates Stadium on Wednesday evening. Here is the team Gooner Mac expects Mikel Arteta to select:

Goalkeeper: Emi Martinez will continue in goal as Bernd Leno remains on the sidelines for another month due to a knee injury.

Defence: David Luiz is a major doubt after being forced off with a knee problem during the win over Sheffield United at the weekend. Rob Holding is on stand-by to come in if the Brazilian is ruled out.

Shkodran Mustafi has been finding some decent form lately and I expect he’ll keep his place in the Arsenal defence – especially if Arteta sticks with a back three like he’s deployed in the last couple of matches.

Sead Kolasinac failed to impress on the left side of the defence on Sunday so I wouldn’t be surprised to see Kieran Tierney moved into the back three as he was solid in that role against Southampton.

Midfield: Arteta has hinted that Cedric Soares could be his first choice right-back / wing-back after praising the Portuguese international today. Soares is now back in full training after recovering from a broken nose but he lacks match fitness so I doubt he’ll start tomorrow.

Ainsley Maitland-Niles started against Sheffield United and did alright but I think we’ll see Hector Bellerin recalled on the right against Norwich. Bellerin could be under a bit of pressure now that he has competition for his place so hopefully we see a good performance from him.

Bukayo Saka is enjoying a fine run in the Arsenal team and the youngster could start in the left wing-back position tomorrow while Granit Xhaka should keep his place in the middle of the park.

Matteo Guendouzi has been axed from the last two squads so I don’t see him being involved again tomorrow. Joe Willock didn’t really take his chance to impress at the weekend so I think we’ll see him dropping to the bench with Dani Ceballos recalled.

Lucas Torreira is back in full training after recovering from an ankle ligament injury but this game is likely to come too soon as he’s not played in several months so a place on the bench is the very best we can hope for.

Attack: Mesut Ozil has still not played a single minute since the restart and missed the FA Cup game with a minor back injury. It remains to be seen whether he’ll be available tomorrow but I don’t think he’ll start even if passed fit.

Nicolas Pepe was disappointing last time out but with Gabriel Martinelli out for the season, I still think Pepe should start on the right wing as he’s a better option than Reiss Nelson.

Pierre-Emerick Aubameyang is set for a recall after being rested against Sheffield United and the Gabon hitman should start from the left side of the Arsenal attack. He’ll be looking to end his goal drought after not scoring in the last four games.

Alexandre Lacazette lead the line up front on Sunday but I expect youngster Eddie Nketiah to get another chance through the middle against Norwich. 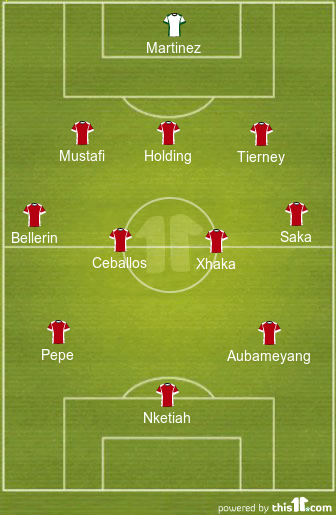