This is our match preview ahead of Arsenal’s Premier League clash with Leicester at the Emirates including team news, line-ups and prediction

Arsenal will be looking to continue their fine recent run when they take on Leicester City at the Emirates Stadium tonight.

The Gunners endured a poor start following football’s resumption last month but have got their campaign back on track with four consecutive victories in all competitions to climb up the table and book their place in the semi-finals of the FA Cup.

Saturday’s crucial 2-0 win at Wolves has left Arsenal sitting seventh in the Premier League but they can move to within just three points of fifth-placed Manchester United with a win over Leicester tonight.

Fifth could be good enough to secure Champions League football if Manchester City’s ban is upheld so Mikel Arteta will be desperate to put some pressure on United with a win ahead of their trip to Aston Villa on Thursday.

However, it won’t be easy as Leicester head to north London sitting four places above Arsenal in the table and this game will have a huge impact on both clubs European aspirations this season.

The Foxes looked comfortable in third only a few weeks ago but a run of one win in their last five games has left them just three points above Man Utd so another defeat tonight would leave their hopes of a top four finish hanging in the balance.

Arsenal are expected to be without Mesut Ozil once again as the playmaker nurses a back issue that’s hampered him in recent games but he’s fallen out-of-favour under Arteta so wouldn’t start even if fit.

Matteo Guendouzi will also be absent after being frozen out of the squad following a bust-up with Arteta last month and the French midfielder’s future looks to be away from the Emirates Stadium.

Arsenal didn’t pick up any fresh injuries at Wolves on Saturday but Bernd Leno is still out with a knee injury while Calum Chambers, Pablo Mari and Gabriel Martinelli remain long-term absentees. Nicolas Pepe should return after missing the Wolves game to be with his partner while she gave birth.

Leicester are set to be without two key players as James Maddison is nursing a hip injury while Ben Chilwell is also a major doubt with a foot problem that he picked up against Crystal Palace at the weekend.

Loanee Ryan Bennett is pushing for a start but Christian Fuchs could be given a recall at left-back. Ayoze Perez is expected to recover from an ankle knock but Ricardo Pereira remains out with a knee injury. 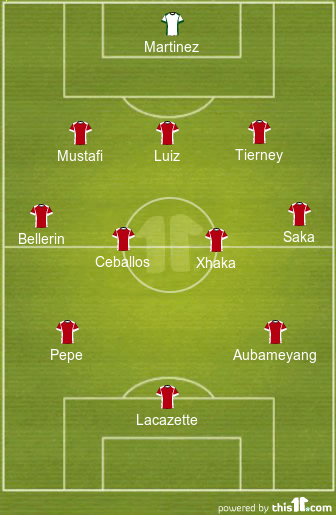 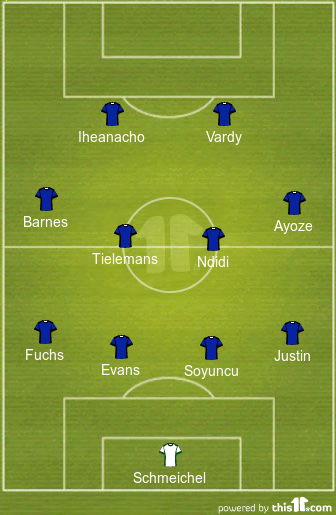 Arsenal 2-1 Leicester: Leicester have been flying for much of the season but their campaign seems to be slipping away at just the wrong time and this will be a big test for Brendan Rodgers’ side. Arsenal are unbeaten in 22 home league games against Leicester and have won each of the last 12 in a row so they have an excellent record in this fixture.

Jamie Vardy is always a threat when he plays against Arsenal as he’s scored nine goals in his last nine games versus the Gunners but I still think the hosts will have the edge tonight. I expect a tight game, but am backing Arsenal to come out with a 2-1 win.