Arsenal will be desperate to get back to winning ways when they take on champions Liverpool at the Emirates on Wednesday night. Here is the team Gooner Mac expects Mikel Arteta to select:

Goalkeeper: Bernd Leno remains on the sidelines as he’s still recovering from a knee injury so Emi Martinez will continue between the sticks and he’ll be looking to keep-up his excellent recent form.

Defence: Arteta has been playing with a settled back three recently but he hinted today at his press conference that he’ll freshen things up ahead of the FA Cup semi-final against Manchester City this weekend.

Therefore, we could see Sead Kolasinac dropped to the bench following his horror-show during Arsenal’s defeat to Tottenham on Sunday with Rob Holding coming in on the left side of the back three.

David Luiz and Shkodran Mustafi also struggled at times during the NLD defeat but I’m not sure Arteta will make wholesale changes against Liverpool. Sokratis is an option if he wants to freshen things up further but Pablo Mari and Calum Chambers remain out through injury.

Midfield: I do think we’ll see a couple of changes in midfield with Cedric Soares is pushing for a recall in the right wing-back position. Hector Bellerin could be given a rest but Kieran Tierney has been one of Arsenal’s best players recently and he could keep his place on the left.

Dani Ceballos has played a lot of football lately so Arteta may be tempted to bring Lucas Torreira back into the team to help combat Liverpool’s midfield three while Granit Xhaka is likely to keep his place in the middle of the park.

Mateo Guendouzi will once again miss out as the Frenchman has been frozen out of the Arsenal squad following a bust-up with Arteta but Joe Willock will be an option from the bench.

Attack: Arsenal were made to rue their missed chances against Tottenham at the weekend so Arteta will be hoping for a more clinical display against Liverpool tomorrow night.

Alexandre Lacazette should keep his place up front as Eddie Nketiah remains suspended and the Frenchman should be in confident mood following his stunning goal in the NLD on Sunday.

Pierre-Emerick Aubameyang should once again start on the left side of the Arsenal attack but I think we’ll see Bukayo Saka recalled on the right with Nicolas Pepe dropping to the bench.

Mesut Ozil is set to miss out once again due to an apparent back problem while Gabriel Martinelli won’t play again this season due to a knee injury but Reiss Nelson should be an option for Arteta as he’ll be named among the subs. 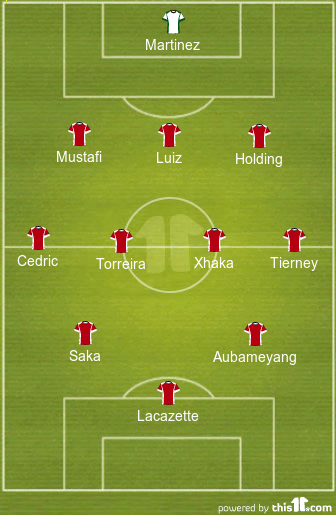