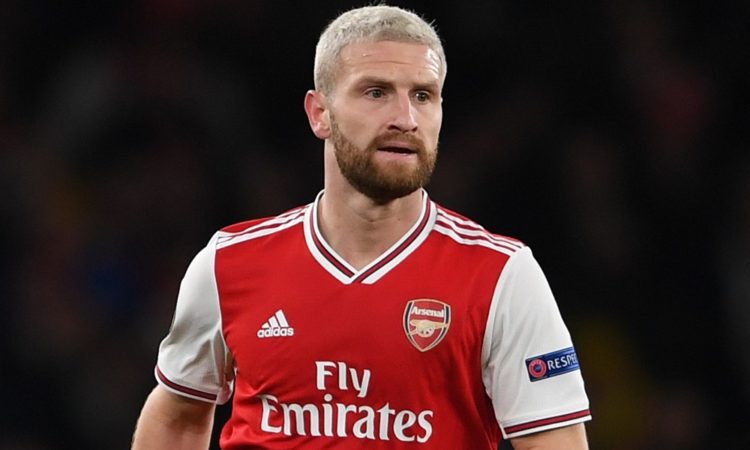 Mikel Arteta will have to make-do without Shkodran Mustafi for the rest of the season after he was ruled out of Arsenal’s final two games including the FA Cup final against Chelsea.

Mustafi limped off during the final stages of Arsenal’s 2-0 win over Manchester City in the semi-finals of the FA Cup last weekend after suffering a hamstring injury at Wembley.

The club have now confirmed on Arsenal.com that the 28-year-old has been ruled out of Sunday’s final Premier League game against Watford and next week’s FA Cup final against Chelsea.

At one point earlier in the season it looked like Mustafi’s career at the Emirates was over but the centre-back has turned things around since Arteta arrived and has been a key player under the Spanish coach so this news will come as a big blow to the Gunners.

However, there is positive news regarding the fitness of Bernd Leno as Arsenal have confirmed the German stopper is now doing ball drills outside and is set to resume full training next week.

If he doesn’t suffer any form of set-back, then Leno could put himself in contention to face Chelsea in the FA Cup final – although it would be harsh to drop Emi Martinez as he’s excelled while Leno has been on the sidelines.

During a team news update on Arsenal.com ahead of the Watford game, the North Londoners confirmed:

Bernd Leno
Right knee. Sustained moderate ligament sprain during Brighton & Hove (a) on June 20.
Now participating in outside running and ball drills. Aiming to be back in full training next week.

Shkodran Mustafi
Right hamstring sustained during FA Cup semi-final on Saturday.
Will miss remaining matches of this season. Further details on recovery programme will be confirmed in the coming days.

With Mustafi now joining long-term absentees Pablo Mari and Calum Chambers on the sidelines, Rob Holding is expected to start for Arsenal during the final two games of the season.

Mari isn’t due to return to full training until September as he continues to recover from an ankle ligament injury while Chambers is still working his way back from a serious knee injury that he suffered last year.

The final update on Arsenal.com was on Gabriel Martinelli’s condition and the Gunners confirmed the attacker is progressing well in his recovery from knee surgery but he won’t be back in training until the end of 2020.

There was no mention of Reiss Nelson in Arsenal’s team news update so it looks like the winger has recovered from the minor groin issue that kept him out of Tuesday night’s defeat at Aston Villa, so his return will give Arteta another option in attack.

Arsenal head into the Watford game on Sunday knowing they can’t finish in the top seven so Arteta would be forgiven for focusing his attention on next weekend’s crucial FA Cup final against Chelsea.