Arsenal take on Chelsea in the FA Cup final at Wembley on Saturday evening. Here is the team Gooner Mac expects Mikel Arteta to select:

Goalkeeper: Bernd Leno is set to return to full training next week after recovering from a knee injury but this game comes too soon so Emi Martinez will continue in goal. The Argentinean has impressed during Leno’s absence so he’ll be looking to continue his fine form between the sticks.

Defence: Arteta has deployed a back three in the majority of matches recently and he’s expected to go with that system tomorrow with David Luiz marshalling the back-line once again against his former club.

Shkodran Mustafi has been ruled out until October with a hamstring injury while Pablo Mari and Calum Chambers remain on the sidelines so Arteta doesn’t have too many options at the back.

Sokratis is out of favour so Rob Holding is expected to keep his place on the right side of the back three while Kieran Tierney has performed superbly well on the left side so I think we’ll see the Scotsman keeping his place ahead of Sead Kolasinac against Chelsea.

Midfield: Hector Bellerin missed the win over Watford last weekend due to a minor knock but the Spaniard is set to return tomorrow so Ainsley Maitland-Niles is set to drop out after starting against the Hornets. Cedric Soares is likely to settle for a place on the bench.

Perhaps the most interesting selection decision Arteta has to make is who starts in the left wing-back role. Bukayo Saka seems the obvious choice but the Arsenal boss may be tempted to start Maitland-Niles after his impressive display against Man City in the semi-finals. I think Saka will just get the nod.

Central midfield is fairly easy to predict as Granit Xhaka will start in the middle of the park and he’ll be joined by Dani Ceballos once again. Lucas Torreira has struggled to nail down a first team place recently so I expect he’ll be on the bench again.

Matteo Guendouzi won’t be involved again as he’s set to leave Arsenal after being frozen out by Arteta but Joe Willock is set to drop to the bench after starting against Watford last weekend.

Attack: Pierre-Emerick Aubameyang has carried Arsenal for much of the season and the focus will be on the Gabon hitman once again to provide the goal threat in the final third against Chelsea.

Alexandre Lacazette is expected to keep his place up front with Eddie Nketiah on the bench while Nicolas Pepe should get the nod on the right wing ahead of Reiss Nelson.

Arsenal have lacked creativity in the final third at times so some are calling for Mesut Ozil to be recalled to the bench but it remains to be seen whether Arteta will hand the German playmaker a lifeline this weekend. 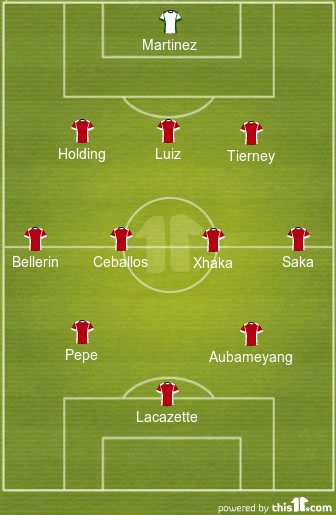