Chelsea begin their Champions League campaign when they take on Sevilla at Stamford Bridge on Tuesday night. Here is the team we expect Frank Lampard to select for the game:

Goalkeeper: Edouard Mendy missed the draw with Southampton at the weekend but has reportedly trained for the past two days so he may be assessed ahead of the game. However, I don’t think Lampard will rush him back so Kepa Arrizabalaga is set to continue in goal against Sevilla.

Defence: Lampard should be boosted by the return of a key man in defence as Thiago Silva is set for a recall after missing the Southampton game having arrived back late from international duty last week.

The Brazilian is set to come-in for Andreas Christensen with Kurt Zouma keeping his place in the middle of the back four. Fikayo Tomori may have to settle for a place among the substitutes once again.

Ben Chilwell should keep his place at left-back but we may see a change on the opposite flank with Reece James pushing for a recall at right-back so Cesar Azpilicueta may drop to the bench.

Midfield: Chelsea should welcome Mateo Kovacic back into the squad but he may still miss out as N’Golo Kante is likely to keep his place alongside Jorginho in the middle of the park tomorrow night.

Lampard confirmed at his press conference today that Billy Gilmour is still a few weeks away from returning from injury so he remains on the sidelines.

Attack: Chelsea were impressive going forward at the weekend and Timo Werner could keep his place through the middle after scoring twice against Southampton. That would mean Tammy Abraham and Olivier Giroud will remain on the bench against Sevilla.

Kai Havertz should keep his place in the attacking midfield role after getting himself on the scoresheet at the weekend while Christian Pulisic could start once again on the left side of the Chelsea attack.

However, we may see Lampard freshening things up on the opposite flank with Callum Hudson-Odoi pushing for a recall. Mason Mount may be the man to miss out. Hakim Ziyech is another option but he’s not fully match fit yet so is likely to remain among the subs. 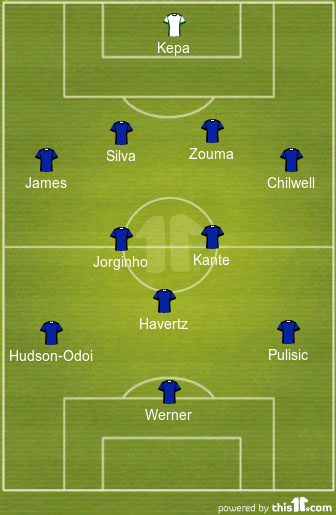