Arsenal begin their Europa League campaign when they take on Rapid Vienna in Austria this evening [5.55pm kick-off].

The Gunners looked to have missed out on European football this season after finishing eighth in the Premier League last year but managed to book their place in the group stages after winning the FA Cup with victory over Chelsea at Wembley.

Arsenal have been handed a good draw as they’re in Group B alongside Dundalk, Molde and today’s opposition, Rapid Vienna, so Mikel Arteta will be confident of making light work of the group stages to progress to the knockout rounds.

The north Londoners will be looking to perform a lot better than they did last year as they were knocked out in the last-32 by Olympiacos but Arsenal are one of the favourites to go all the way to win the Europa League this season.

Arteta’s men have made a solid start to the new season having won three of their five Premier League games so far with the two defeats coming against Liverpool and Man City so the Arsenal boss will be hoping for a winning start in Europe this evening.

Arsenal are without Willian after the attacker was ruled out with a knock that he picked-up against City while Dani Ceballos hasn’t travelled to Austria due to an ankle issue that he sustained at the weekend.

Rob Holding has been ruled out for three weeks with a hamstring injury so he joins Gabriel Martinelli on the sidelines while Calum Chambers and Pablo Mari are still working their way back to full fitness from injury.

Mesut Ozil and Sokratis aren’t eligible after being left out of Arsenal’s Europa League squad, however, Shkodran Mustafi is back in contention after recovering from a hamstring problem.

Arteta is expected to rest key players such as Pierre-Emerick Aubameyang, Granit Xhaka, Kieran Tierney and Hector Bellerin. Thomas Partey should come in to make his full debut while Alex Runarsson is in-line to make his first start in goal. 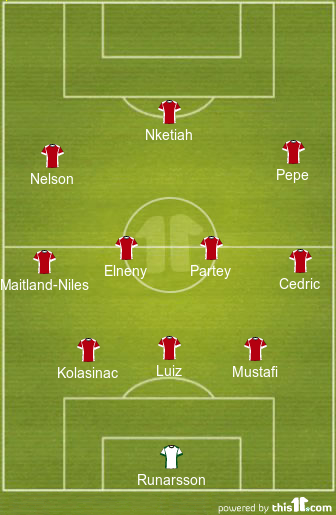 Rapid 1-2 Arsenal: There is no doubt Arsenal are far more organised defensively under Arteta these days and even accounting for plenty of rotation, we should still see a more resolute away performance from the Gunners.

Rapid Vienna have a good recent record on home soil having won their last four games in all competitions at the Allianz Stadion but they haven’t faced a side with the quality of Arsenal so this will certainly be a step-up in class.

The Gunners are expected to field a weakened side but I still think they’ll have too much quality for the hosts in the end, so I’m predicting a narrow away win this evening.