Manchester United take on Chelsea at Old Trafford on Saturday evening. Here is the line-up we think Ole Gunnar Solskjaer will select for the game:

Goalkeeper: David De Gea was excellent during United’s superb 2-1 victory over Paris Saint-Germain on Tuesday night so he’s almost certain to keep his place meaning Dean Henderson will have to settle for a place on the bench once again.

Defence: Man Utd will need to assess Harry Maguire after he missed the trip to Paris with a knock. The injury isn’t serious and no doubt Solskjaer will give his captain every opportunity to prove his fitness so it wouldn’t be a surprise to see Maguire back in the starting eleven.

Solskjaer may opt to play a back four on Saturday so Victor Lindelof could drop to the bench if Maguire is passed fit as Axel Tuanzebe was outstanding against PSG so deserves to keep his place against Chelsea.

Alex Telles showed his danger going forward and may have done enough to keep his place so Luke Shaw might miss out. Aaron Wan-Bissaka should once again start at right-back this weekend.

Midfield: Manchester United worked hard in midfield to snuff out PSG in midweek so Solskjaer may want to change things up against Chelsea and bring in some fresh legs. Paul Pogba is pushing for a recall after being on the bench for the last two games so he could come back into the side this weekend.

Scott McTominay played very well in the Champions League victory so he may have done enough to keep his place with Fred the man to drop to the bench where he’ll join Nemanja Matic.

Attack: Anthony Martial will be suspended so Marcus Rashford should start up front as Edinson Cavani is still working his way back to full fitness – although the Uruguayan international could make the bench.

Mason Greenwood missed the trip to Paris due to disciplinary reasons but could be recalled to start on the right side of attack while Juan Mata may come in on the opposite flank. Daniel James will therefore settle for a place on the bench against Chelsea this weekend. 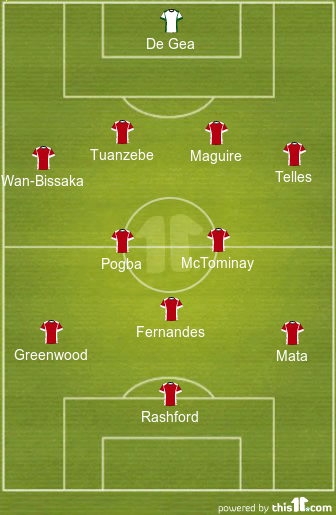