Chelsea take on Rennes in the Champions League at Stamford Bridge on Wednesday night. Here is the team we expect Frank Lampard to select for the game:

Goalkeeper: Edouard Mendy is almost certain to keep his place between the sticks as Chelsea’s No.1 is fully fit. Kepa Arrizabalaga is still struggling with a shoulder injury so Willy Caballero should once again be on the bench.

Defence: Chelsea are expected to stick with a back four and I don’t see them making too many changes from the defence that started during the 3-0 victory over Burnley on Saturday.

Antonio Rudiger and Andreas Christensen are pushing for recalls but Thiago Silva should once again line-up alongside Kurt Zouma so they may have to battle for places on the bench.

Ben Chilwell has played a lot of football lately and Lampard has Emerson Palmeiri available if he wants to give his first choice left-back a rest but I think the England international will keep his place. However, we could see a change on the right side of the defence with Cesar Azpilicueta coming in for Reece James.

Midfield: Chelsea are expected to recall Jorginho after he was given a breather at the weekend. The Italian international should line-up alongside N’Golo Kante in the middle of the park with Mateo Kovacic missing out.

Mason Mount has been showing some good form lately so he may keep his place to start in the central attacking midfield position with summer signing Kai Havertz given a well earned rest.

Attack: Hakim Ziyech continued his fine start to life as a Chelsea player with another goal at the weekend so the Moroccan international should keep his place in attack tomorrow night.

Tammy Abraham may be given another chance to impress up front with Lampard taking the opportunity to give Timo Werner a rest after he was a late call-up to the starting eleven against Burnley at the weekend.

Werner was called-in to replace Christian Pulisic after he pulled-up with an injury in the warm-up and the winger has been ruled out of the Champions League clash with Rennes – although Lampard says the injury isn’t serious.

That means Callum Hudson-Odoi should be recalled in the Chelsea attack. The 19-year-old was a second half substitute against Burnley but may be given the nod to start alongside Abraham and Ziyech tomorrow. 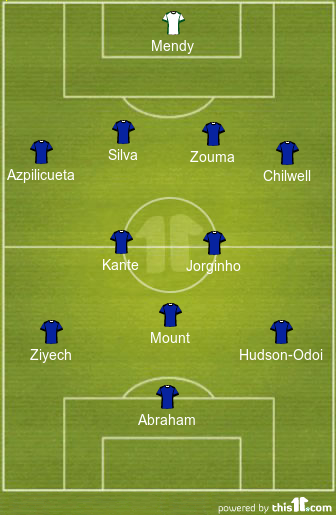