Goalkeeper: Bernd Leno will be given a rest so Alex Runarsson should get another chance to impress in goal tomorrow night.

Defence: Arsenal will once again make wholesale changes in defence in the Europa League as they’ve already sealed qualification to the knockout stages as group winners. Gabriel, Kieran Tierney and Hector Bellerin should all be rested while Rob Holding is also likely to drop out.

Pablo Mari made a successful return to action against Rapid Vienna last week so he should start alongside Shkodran Mustafi in the middle of the back four while Cedric Soares should come-in at right-back.

David Luiz has missed the last two games with a head injury so he’s unlikely to be involved tomorrow but Calum Chambers is in contention and could be on the Arsenal bench. Sead Kolasinac is available and should come-in for Kieran Tierney at left-back.

Midfield: Arsenal were dealt a huge blow on Sunday after Thomas Partey aggravated a thigh injury during the defeat to Tottenham so the midfielder is facing another spell on the sidelines.

Granit Xhaka and Dani Ceballos should be rested so Mohamed Elneny will come into the side while Ainsley Maitland-Niles could get another chance in the middle of the park after impressing against Vienna last week.

Emile Smith Rowe is pushing for a start after making a good impact off the bench last time out in the Europa League but Joe Willock could get the nod in the attacking midfield role tomorrow night.

Attack: Obviously Pierre-Emerick Aubameyang will be rested while Willian and Bukayo Saka should also get the night off. Alexandre Lacazette started for Arsenal against Spurs so he’s also likely to be rested.

Nicolas Pepe will start on the wing as he’s suspended in the Premier League and I expect Reiss Nelson to get another run out. Eddie Nketiah will be hoping to start up front but reports suggest Folarin Balogum will be handed his full debut for the Gunners. 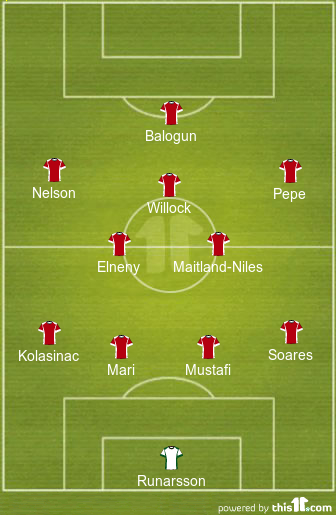