Arsenal take on Burnley at the Emirates Stadium on Sunday evening. Here is the team Gooner Mac expects Mikel Arteta to select:

Goalkeeper: Bernd Leno will be recalled after being rested for the Europa League win over Dundalk on Thursday night so Alex Runarsson will drop back to the bench after an unconvincing performance in Ireland.

Defence: Arsenal will make a late decision over David Luiz as he’s missed the last two games with a head injury but the Brazilian is being tipped to return this weekend and could partner Gabriel in the middle of defence.

It will be interesting to see if Arteta sticks with a back three after deploying that system in the Europa League or reverts to a back four that he’s used recently but I think we’ll see a return to a four-man defence against Burnley.

Hector Bellerin should come in for Cedric Soares at right-back while Kieran Tierney will be recalled on the left with Calum Chambers, Shkodran Mustafi, Pablo Mari and Ainsley Maitland-Niles all dropping out.

Midfield: Arsenal will be without Thomas Partey after the midfielder was ruled out for ‘a few games’ having aggravated his thigh injury against Tottenham last weekend which is a huge blow for Arteta.

Mohamed Elneny will be hoping to keep his place after scoring a stunner on Thursday night but I still think it will be Dani Ceballos alongside Granit Xhaka in the middle of the park on Sunday.

Attack: Pierre-Emerick Aubameyang will obviously be recalled and the Gabon hitman will be desperate to get back among the goals having endured a nightmare start to the new season so Eddie Nketiah will make way despite finding the target at Dundalk.

Emile Smith Rowe impressed in the Europa League as did Joe Willock but the duo are unlikely to keep their places on Sunday with Alexandre Lacazette and Bukayo Saka expected to be recalled to the starting eleven.

Nicolas Pepe will serve the final game of his three-match suspension so there is a place on the wing up for grabs. Reiss Nelson missed the trip to Dundalk last night due to a knock so we could see Willian starting against Burnley. The Brazilian has been poor recently but Arteta has shown faith in the 32-year-old so I expect him to line-up on Sunday.

Folarin Balogun impressed once again after coming off the bench to score and grab an assist against Dundalk so he could now be pushing Nketiah for a place on the Arsenal bench in Premier League games. 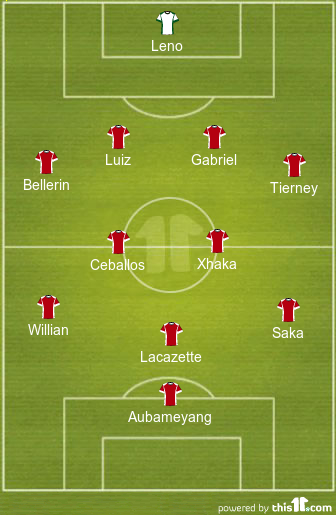