Chelsea take on Everton at Goodison Park on Saturday night. Here is the team we expect Frank Lampard to select for the game:

Goalkeeper: Edouard Mendy is set for a recall after being rested in midweek so Kepa Arrizabalaga will drop back to the bench once again.

Defence: Chelsea are expected to make wholesale changes in defence with Lampard recalling his big guns after they were rested for the Champions League group stage game with Krasnodar.

Ben Chilwell will come in for Emerson at left-back while Reece James should replace Cesar Azpilicueta at right-back after they were rested in midweek. Antonio Rudiger and Andreas Christensen are also set to make way with Thiago Silva and Kurt Zouma recalled in the middle of the back four.

Midfield: Lampard will freshen things up in midfield too with N’Golo Kante recalled in the middle of the park. Jorginho was on the score-sheet from the spot on Tuesday night but he’s expected to drop to the bench tomorrow.

Mateo Kovacic could keep his place in the Chelsea midfield but Billy Gilmour is expected to make way after a run out in midweek following his return form injury. Mason Mount will come in for the Scottish international.

Attack: Chelsea have a couple of injury issues in attack as Hakim Ziyech has been ruled out for a couple of weeks with a thigh injury that he picked up against Leeds last week while Callum Hudson-Odoi will also miss the trip to Everton with a muscle problem.

Christian Pulisic is expected to return after overcoming his own injury issues in recent weeks so youngster Tino Anjorin will make way after starting against Krasnodar in the Champions League.

Tammy Abraham is expected to drop to the bench with Olivier Giroud recalled up front while Timo Werner is also in-line for a recall after being rested last time out. That means Kai Havertz may have to settle for a place among the substitutes having started Chelsea’s last three games. 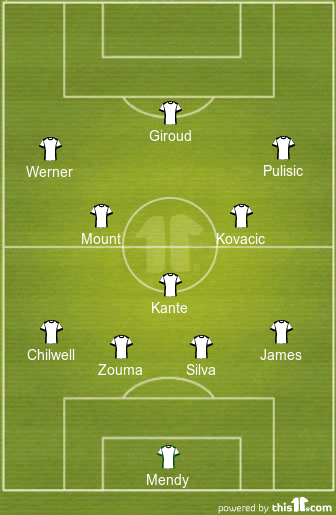