Chelsea take on Wolves at Stamford Bridge on Wednesday evening. Thomas Tuchel has been confirmed as the new Chelsea manager, here is the team we expect him to select for his first game in charge:

Goalkeeper: Number one goalkeeper Edouard Mendy is certain to be recalled after being rested for the FA Cup win over Luton. Kepa Arrizabalaga failed to take his chance at the weekend after making another mistake so he’ll drop back to the bench.

Defence: Chelsea are expected to make plenty of changes in defence with Thiago Silva and Antonio Rudiger set for recalls after they were rested against Luton. Kurt Zouma and Andreas Christensen will probably find themselves named among the substitutes tomorrow night.

Ben Chilwell was also given a breather at the weekend so he’ll be recalled at left-back while Reece James is expected to keep his place at right-back for Chelsea with Cesar Azpilicueta missing out.

Midfield: N’Golo Kante is facing a late fitness test after struggling with a thigh injury in recent weeks but he might not be risked from the start against Wolves tomorrow night.

Tuchel usually likes to have a deep lying midfielder in his team so that could see Jorginho recalled to start while Mason Mount should keep his place in the middle of the park as he’s been one of Chelsea’s best performers this season.

Kai Havertz has endured a tough start to life in west London so one of Tuchel’s key jobs is to try and get the best out of the young German. Havertz is expected to be recalled to start against Wolves and he may be deployed in a box-to-box role as part of a midfield three.

Billy Gilmour will drop to the bench while Mateo Kovacic may also have to settle for a place among the substitutes tomorrow night.

Attack: The other big task for Tuchel is to get Timo Werner firing on all cylinders. Tammy Abraham netted a hat-trick against Luton at the weekend but we could still see Werner recalled meaning Abraham has to settle for a place on the bench.

Christian Pulisic knows Tuchel well from their time together at Borussia Dortmund and the United States international is expected to be a key player under the new Chelsea manager.

Callum Hudson-Odoi is pushing for a recall after being on the bench at the weekend but Hakim Ziyech could keep his place on the wing against Wolves. 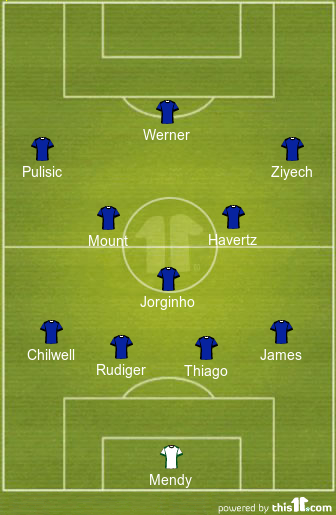