What Would Count As Success For Tuchel In His First Season?

Thomas Tuchel signed an 18-month contract to become the new Chelsea manager on 26 January 2021 on the understanding that he must bring success to the London side.

He arrived with lots to review in his inbox. A team outside of the top four, a side lacking identity and star players struggling for form. It’s a lot for him to address and he has his work cut out to be a success. The question is: what would count as that at the end of his first season?

We look at what the insiders and outsiders are predicting for Tuchel, then offer our own take on what Tuchel needs to do to end his first campaign with a positive appraisal.

What are the outsiders predicting?

Everyone has an opinion on what counts as success in football. But before we get drawn into emotive arguments (people invested in how Chelsea perform) it’s important to see what outsiders think. This is because these sources are often the best way to get a true picture of what would count as success, including for Tuchel.

The way to get this outside view is to see what sports betting sites and casinos are saying. Namely, where they think Chelsea will finish in the league and the other competitions they remain in.

Sports betting sites and casinos give a clear way of measuring success — the odds of victory. We checked what some of the top sites are currently (as of February 2021) saying about Chelsea:

While the figures are all slightly different, the odds all say the same thing: Chelsea won’t win the Premier League or the Champions League and they’re expected to finish fifth in the EPL.

Of course, these odds change on a daily basis. This is why we recommend checking the best casino sites from OnlineCasinos.co.uk, for example, because what counts as success today could look very different after Tuchel has had more time in the job.

Our view, though, is that outsiders think success for Chelsea would be a top four finish.

What are the insiders’ expectations?

We spoke earlier about not getting caught up in emotive views when determining what would count as success for Tuchel. But you can’t avoid the fact that emotions do have an impact — if a manager (including Tuchel) loses the emotional support of the fans, players or board then they’ll inevitably get the sack. This is why inside expectations are so important.

There are two key groups of people that can give you the best idea of what these expectations are: fans and owners/board members.

Tuchel will bring us success,mark my words

The idea that Tuchel will be a success at Chelsea is shared by a lot of Chelsea fans. Of course, this can change minute by minute. This is why we advise looking at the comments made by fans on the best football articles from the Athletic, as their vision of success could look very different after Tuchel has a few games behind him.

If it’s fair to say that Chelsea fans do think Tuchel will be a success, what’s also valid is that there isn’t currently a universal view of what this will look like. Indeed, some of the cautious (sensible even) ideas of success aren’t thought to be good enough by commentators, as the image below explains: 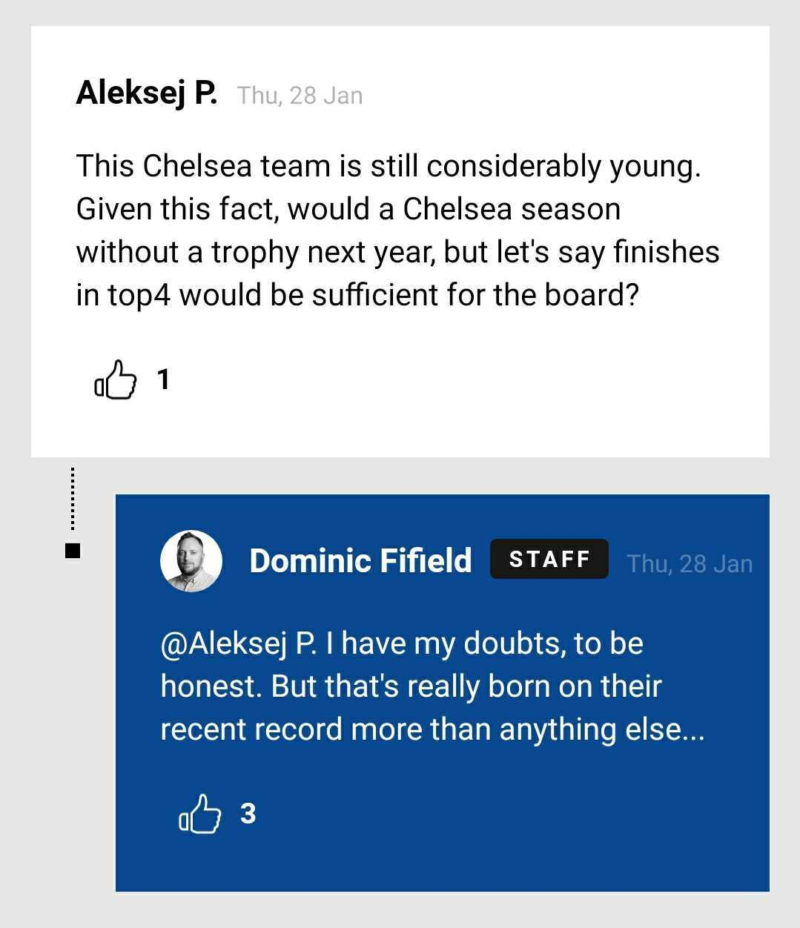 When Dominic Fifield talks about “their recent record” it’s a thinly veiled way of saying that the Chelsea board (specifically the owner, Roman Abramovich) has a very specific view of success for the team’s manager — a top four finish is the minimum requirement and trophies need to follow.

Abramovich has never been shy about pulling the trigger on a manager who doesn’t look like they can deliver these things, as Tuchel’s successor, Frank Lampard, would attest to.

Based on what Chelsea’s past performances, the team’s current standing, what the fans are saying and Abramovich’s track record, our view is that third place in the Premier League and a run to the Champions League quarter final would count as success for Chelsea insiders.

Conclusion: what we think would count as success for Tuchel

Tuchel is a trophy winner and one of football’s great coaching intellectuals. He won the DFB-Pokal at Borussia Dortmund and a slew of honours at Paris Saint-Germain. He’s also renowned for improving the output and flexibility of his players, while promoting youth and an attractive style of football.

These are all things the Chelsea board, owner and fans want to see at Chelsea. It stands to reason then that if Tuchel brings the qualities he’s known for then he’ll be a successful appointment for the London side.

The question is just how many of these things Tuchel can introduce in his first season.

One thing to keep in mind is that this is a very strange season. The previous three Premier League winners have won the title with previously unheard of points totals (99, 98 and 100 respectively). This season the league could be won with 80ish points.

Now, we don’t think Chelsea will win the league. However, they might need much fewer points than before to secure a top four finish. We do think that ending the season in the Champions League places is an achievable goal.

As far as the cup competitions go, Chelsea are still in the Champions League and FA Cup. We’re discounting their chances of winning the former because they play Atlético Madrid (Europe’s form team) in the first knockout stage. But the FA Cup is a possibility.

So, what’s our conclusion on what would count as success for Tuchel in his first season? We’re saying that if he can get Chelsea playing in a more progressive way, bring their big name signings into form, secure a top four finish and round this all off by winning the FA Cup then he’ll have had a very successful season.