Chelsea take on Atletico Madrid in the Champions League on Tuesday night. Here is the team we expect Thomas Tuchel to select for the game:

Goalkeeper: Number one goalkeeper Edouard Mendy was back between the sticks for the 1-1 draw at Southampton on Saturday and he’s expected to retain the gloves tomorrow night so Kepa Arrizabalaga will remain on the bench.

Defence: Thiago Silva is back in training after recovering from a muscle injury but this game comes too soon so the Brazilian international has been left back in West London to continue working on his fitness.

Andreas Christensen is pushing for a recall after not being risked for Chelsea’s trip to St Mary’s at the weekend so he could start in defence against Atletico. Antonio Rudiger and Cesar Azpilicueta should keep their places so Kurt Zouma will be the man to make way.

Midfield: Ben Chilwell will be hoping to feature as he’s been left out for the past few games but Tuchel appears to favour Marcos Alonso right now so he could retain his place on the left flank.

Tuchel was critical of Callum Hudson-Odoi’s performance at the weekend so he’s unlikely to start tomorrow meaning Reece James should keep his place on the right.

Jorginho is pushing for a recall after being rested at the weekend. Mateo Kovacic has been virtually ever-present since Tuchel arrived so N’Golo Kante could be the man to make way despite his solid performance on Saturday.

Attack: Kai Havertz is back in the squad after returning to full training but the German attacker may have to settle for a place on the bench tomorrow night after a month on the sidelines.

Tammy Abraham picked up a knock on Saturday so he might not be risked from the start meaning Timo Werner may lead the line up front. That would open the door for Christian Pulisic to return to the Chelsea attack after he recovered from a muscle injury.

Hakim Ziyech is an option for the Blues in attack but he may have to settle for a place among the substitutes as Mason Mount is expected to keep his place in attack against Atletico Madrid. 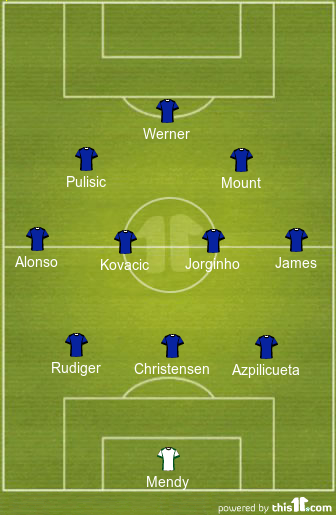