Chelsea take on Manchester United at Stamford Bridge on Sunday afternoon. Here is the team we expect Thomas Tuchel to select for the game:

Chelsea take on Manchester United at Stamford Bridge on Sunday afternoon. Here is the team we expect Thomas Tuchel to select for the game:

Goalkeeper: Number one goalkeeper Edouard Mendy is expected to retain his place between the sticks so Kepa Arrizabalaga will remain on the bench this weekend.

Defence: Thiago Silva is still in individual training as he continues to recover from a muscle injury that’s kept him out recently so the Brazilian won’t be ready to return for the visit of Manchester United on Sunday.

Therefore, we expect Tuchel to stick with the same back three that started during Chelsea’s 1-0 Champions League win at Atletico Madrid on Tuesday night meaning Andreas Christensen will continue alongside Antonio Rudiger and Cesar Azpilicueta with Kurt Zouma on the bench.

Midfield: Ben Chilwell will be hoping for a recall against Manchester United but Marcos Alonso is back in favour under Tuchel so he could keep his place in the left wing-back position. However, we could see a change on the right with Reece James coming in for Callum Hudson-Odoi.

N’Golo Kante was on the bench against Atletico Madrid in midweek so he’s expected to be recalled to face Man Utd on Sunday. Jorginho could be the man to make way as Mateo Kovacic has been virtually ever-present since Tuchel arrived.

Attack: Olivier Giroud could have done enough to retain his place in the Chelsea attack after scoring a superb winner in the Champions League so Tammy Abraham may have to settle for a place among the substitutes.

Timo Werner should keep his place while Mason Mount has been one of Chelsea’s most consistent performers so he’ll hope to start against Manchester United this weekend.

That means Christian Pulisic and Hakim Ziyech may have to make-do with places on the bench on Sunday while Kai Havertz is also expected to miss out on a starting spot against United but Chelsea have plenty of attacking options at their disposal. 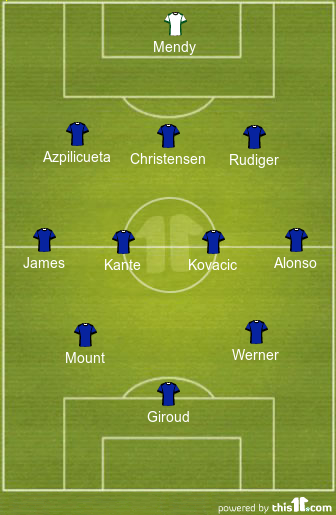