Liverpool will be desperate to get back to winning ways when they take on Fulham at Anfield on Sunday afternoon. Here is the team we expect Jurgen Klopp to select for the game:

Goalkeeper: Alisson Becker made his return to action during the defeat to Chelsea so the Brazilian will continue between the sticks tomorrow with Adrian on the bench.

Defence: Liverpool were also boosted by the return to fitness of Fabinho last week and he’s expected to keep his place in defence with the likes of Virgil van Dijk, Joe Gomez and Joel Matip all still out with long-term injuries.

Ozan Kabak is a major doubt for the visit of Fulham after picking up a knock against Chelsea so Nat Phillips is set for a recall to start along with Fabinho, Andy Robertson and Trent Alexander-Arnold in the Liverpool back four.

Midfield: Jordan Henderson has been ruled out for several weeks following groin surgery but Naby Keita is pushing for a recall after returning to fitness recently after overcoming a niggling thigh injury.

Curtis Jones could be the man to make way if Keita is recalled as Gini Wijnaldum should keep his place while Klopp may stick with Thiago Alcantara despite his difficult first season with Liverpool.

James Milner and Alex Oxlade-Chamberlain will have to settle for places on the bench against Fulham.

Forward: Liverpool need to find a spark in attack as they’ve been dire in the final third lately. Diogo Jota is available after making his return off the bench following almost three months on the sidelines so he could start tomorrow afternoon.

Roberto Firmino is the man most likely to make way as Mohamed Salah and Sadio Mane should keep their places in the Liverpool front three. Xherdan Shaqiri and Divock Origi will have to make-do with places on the bench. 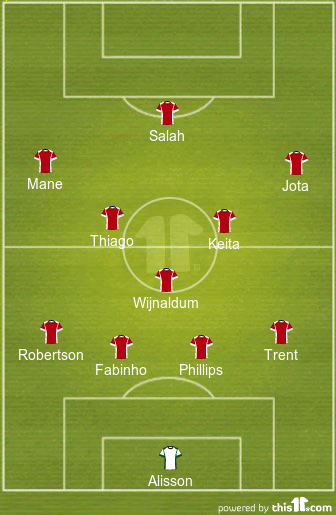