Liverpool take on Leipzig in the second leg of their Champions League tie on Wednesday night. Here is the team we expect Jurgen Klopp to select

Liverpool take on RB Leipzig at Anfield in the second leg of their Champions League tie on Wednesday night. Here is the team we expect Jurgen Klopp to select for the game:

Goalkeeper: Alisson Becker will continue between the sticks for Liverpool tomorrow night so Adrian is likely to remain on the bench with Caoimhin Kelleher injured.

Defence: The likes of Virgil van Dijk, Joel Matip and Joe Gomez remain injured but Klopp is set to recall a number of players in defence after some key men were rested for the shock 1-0 defeat to Fulham at the weekend.

Fabinho will return to start while Ozan Kabak could be fit for the game as he took part in training today having missed Liverpool’s defeat to Fulham with a knock. Nat Phillips and Rhys Williams will drop to the bench.

Trent Alexander-Arnold was rested from the start at the weekend so he’ll return in place of Neco Williams at right-back while Andy Robertson will be looking to get back to his best form after a below-par display on Sunday.

Midfield: Jordan Henderson remains out following groin surgery so he won’t be involved against Leipzig but Gini Wijnaldum is expected to keep his place in the middle of the park for Liverpool tomorrow night.

Thiago Alcantara could be recalled to start after being rested at the weekend while Curtis Jones is also expected to come back in to the side with James Milner and Naby Keita making way. Alex Oxlade-Chamberlain will have to settle for places on the bench once again.

Forward: Liverpool’s woes in the final third continued on Sunday as they failed to break Fulham down but Sadio Mane will be recalled after being named on the bench against the Cottagers so his return could add a much-needed spark.

Roberto Firmino wasn’t spotted at training on Tuesday after missing out at the weekend with a knock so he’s a doubt to face Leipzig. IThe Brazilian isn’t likely to be fit to start so Mohamed Salah could lead the line up front with Diogo Jota keeping his place on the wing.  Xherdan Shaqiri and Divock Origi will have to make-do with places on the bench. 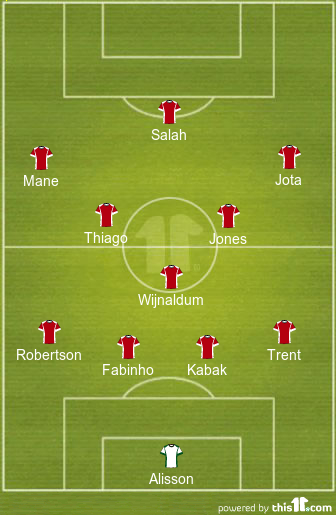