Chelsea take on Manchester City in the semi-finals of the FA Cup on Saturday evening. Here is the team we expect Thomas Tuchel to select

Chelsea take on Manchester City in the semi-finals of the FA Cup on Saturday evening. Here is the team we expect Thomas Tuchel to select for the game:

Goalkeeper: Kepa Arrizabalaga has played in the previous four rounds of the FA Cup so he’ll be hoping to get another run-out tomorrow. However, with it being a semi-final against Man City, Tuchel is being tipped to select number one goalkeeper Edouard Mendy.

Defence: Andreas Christensen has been ruled out with a knock that’s hampered him lately so I don’t think we’ll see any changes to the Chelsea back three that featured against Porto last time out.

Kurt Zouma is an option if Tuchel wants to freshen things up but I think we’ll see Thiago Silva keeping his place along with Antonio Rudiger and Cesar Azpilicueta tomorrow evening.

Midfield: Mateo Kovacic has been ruled out of the FA Cup semi final due to a thigh injury that forced him to miss Chelsea’s Champions League quarter-final defeat to Porto in midweek.

However, N’Golo Kante came through the ninety minutes against Porto and should keep his place alongside Jorginho in the middle of the park this weekend.

Ben Chilwell is expected to keep his place on the left flank ahead of Marcos Alonso while Reece James is favourite to start on the opposite flank with Callum Hudson-Odoi having to settle for a place among the Chelsea substitutes.

Attack: Tuchel is expected to freshen things up in attack as he has plenty of options in the final third. Timo Werner is pushing for a recall after being left out recently so he could return up front.

Kai Havertz has played a lot of football in recent weeks so he might drop to the bench. Christian Pulisic has also started in Chelsea’s last two matches so we could see Hakim Ziyech come in alongside Mason Mount against Man City. 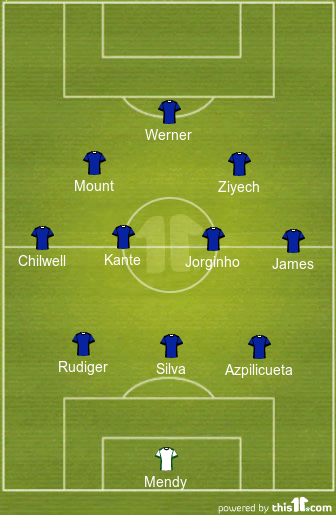