Liverpool will take another trip down to Old Trafford this evening where they will finally get to face Man Utd in the Premier League. 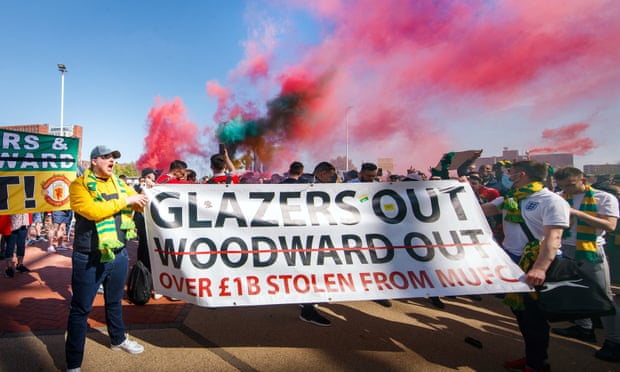 Following the original postponement of the match, Liverpool will take another trip down to Old Trafford this evening where they will finally get to face Man Utd in the Premier League.

This game was due to take place on the 2nd May, however the game had to be postponed for safety reasons following protests by Man Utd fans against their owners. Whilst some protestors gathered outside the Lowry Hotel – where the players were staying – preventing the team bus from leaving, others found their way onto the Old Trafford pitch, making the chances of the game being played very slim.

There are potential further protests planned to take place at 6pm outside Old Trafford, two hours before the game is due to kick off. The pictures taken of Old Trafford’s heightened security and officers would suggest that Utd are much better prepared for this protest and unwilling to allow the game to be called off for a second time.

The rescheduling of this game has resulted in Utd having to play four games in only eight days and could be argued as putting the integrity of the Premier League at stake. This comes as manager Ole Gunnar Solskjaer was forced to field a weakened Utd team on Tuesday, with 10 changes in total which practically gifted Leicester three points and damaged Liverpool’s hopes of a top four finish.

Consequently, whilst Man Utd’s second place position is still secure, Liverpool otherwise have to get a win from the game in order to have any chance of Champions League football next year.

As Solskjaer made 10 changes to the squad on Tuesday, those who were rested – including the likes of Bruno Fernandes, Paul Pogba, Luke Shaw and Aaron Wan-Bissaka – are all likely to be welcomed back into the starting line-up.

Talking about potential changes, Solskjaer said, “There will be changes, of course but many of the players that played tonight did really well so they’re in contention as well. It’s about managing the squad now and building momentum, building confidence, making sure we get enough points to get second [place] and then going into the final confident.”

For Liverpool, Jurgen Klopp confirmed that no players have returned ahead of their game against Man Utd. This means Virgil van Dijk, Joe Gomez, Joel Matip, Ozan Kabak, Ben Davies, James Milner and Jordan Henderson will all be out of contention to play.

Wholesale changes are expected from Solskjaer, starting with the goalkeeper as Dean Henderson will likely come in for David de Gea.

At the back, Eric Bailly looks to be the sole survivor from the previous game as Victor Lindelof, Aaron Wan-Bissaka and Luke Shaw all return to the starting line-up.

Fred and Scott McTominay will reclaim their partnership in the middle of the field in the place of Donny van de Beek and Nemanja Matic.

Ahead of them, Paul Pogba will return to his spot on the left wing in the place of young Anthony Elanga, with Bruno Fernandes in attacking midfield and Marcus Rashford to his right, replacing the young Amad Diallo.

Leading the line will most likely be Edinson Cavani, who recently signed a new contract extension with Man Utd. As Mason Greenwood has played the majority of the last three games, Solskjaer will want to give the 19 year old a well-deserved rest during this game, perhaps using him as a substitute near the end.

The only change Klopp may make from the team that faced Southampton last Saturday would see Roberto Firmino starting ahead of Diogo Jota.

With a fair number of Liverpool’s squad currently out with injury, Klopp has little option to make any further changes to his squad. Therefore, 10 out of the 11 are likely to remain unchanged.

All the pressure is on Liverpool as a win is an absolute must if they want to compete in the Champions League next season. This means they will have to play an attacking style of football and as Utd’s skipper and leading defender is currently injured, there will be opportunity for goals. Nevertheless, this style of football will leave them open to counter-attacks and with Utd’s attacking threat and Liverpool’s depleted defence, the odds may be in Utd’s favour.