Liverpool take on Norwich City at Carrow Road in the third round of the Carabao Cup on Tuesday night. Here is the team we expect Jurgen Klopp to select

Liverpool take on Norwich City at Carrow Road in the third round of the Carabao Cup on Tuesday night. Here is the team we expect Jurgen Klopp to select for the game:

Goalkeeper: Alisson Becker is set for a rest with Caoimhín Kelleher expected to be handed a rare start for Liverpool tomorrow night.

Defence: Klopp is likely to make plenty of changes to his defence with Virgil van Dijk among those given a breather. Ibrahima Konate impressed on his full debut at the weekend but the Frenchman is likely to drop out with Joel Matip ready for a recall after being rested for the win over Crystal Palace.

Trent Alexander-Arnold missed the victory on Saturday through illness and he’s unlikely to be risked at Norwich so Joe Gomez could start at right-back with Nat Phillips alongside Matip in the middle of the Liverpool back four. Kostas Tsimikas got a run out at the weekend but Andrew Robertson could return at left-back for the League Cup tie.

Midfield: Liverpool were dealt another injury blow after Thiago Alcantara limped off against Palace so the Spaniard isn’t likely to be involved at Carrow Road while Fabinho and Jordan Henderson should be rested.

James Milner could therefore move into the defensive midfield role with Naby Keita recalled to the starting eleven after scoring a stunner off the bench on Saturday. Curtis Jones is also pushing for a recall with the 20-year-old consigned to a substitutes role for much of the campaign so far.

Forward: Liverpool are expected to rest their key forwards ahead of the Premier League clash with Brentford next weekend so we should see Mohamed Salah, Sadio Mane and Diogo Jota drop out.

Roberto Firmino missed the Palace game with an on-going thigh injury so the Brazilian international isn’t expected to feature against Norwich which leaves Klopp with relatively few options in attack.

That means Alex Oxlade-Chamberlain may start in a wide role for the Reds with Takumi Minamino given also chance to impress. Divock Origi is expected to lead the line up front for Liverpool with a couple of the big hitters named on the bench. 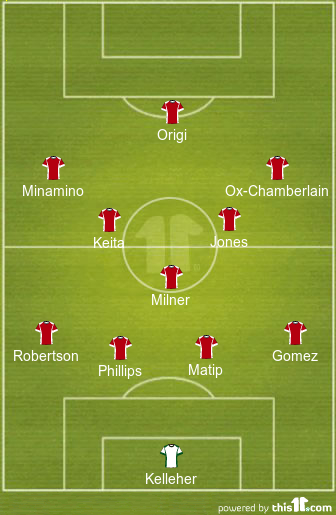