Manchester United take on Villarreal at Old Trafford on Wednesday night. Here is the line-up we think Ole Gunnar Solskjaer will select for the game:

Manchester United will look to get back to winning ways when they take on Villarreal in the Champions League at Old Trafford on Wednesday night. Here is the line-up we think Ole Gunnar Solskjaer will select for the game:

Goalkeeper: Dean Henderson played in the Carabao Cup last week but David De Gea is expected to retain his place between the sticks against Villarreal.

Defence: Man Utd are going to have to make changes in defence with three regulars set to miss out. Aaron Wan-Bissaka is definitely out as he’s suspended so Diogo Dalot will come in at right-back.

Harry Maguire was forced off during the 1-0 defeat to Aston Villa at the weekend due to a calf injury and Solskjaer has suggested the centre-back could be out for a few weeks. Victor Lindelof is expected to be recalled to line-up alongside Raphael Varane tomorrow night.

Luke Shaw was also substituted against Villa on Saturday due to injury and although Solskjaer says there is a chance he could make the bench against Villarreal, it looks like Alex Telles will start at left-back.

Midfield: Nemanja Matic is pushing for a recall while Donny van de Beek is another option for Manchester United if Solskjaer wants to freshen things up in midfield but we think he’ll stick with Fred and Scott McTominay in the middle of the park.

Bruno Fernandes is almost certain to keep his place in the attacking midfield role so Juan Mata will miss out on a starting spot once again.

Attack: Manchester United could make one change in attack with Jadon Sancho pushing for a recall. The English winger has made a slow start to life at Old Trafford since arriving from Borussia Dortmund so he’ll be desperate to make an impression if called upon tomorrow.

Mason Greenwood could be the man to make way as Paul Pogba is likely to keep his place while Cristiano Ronaldo should once again lead the line up front as he looks to continue his stunning goal-scoring record in the Champions League.

Edinson Cavani, Anthony Martial and Jesse Lingard will be among the United substitutes but Marcus Rashford remains out following shoulder surgery. 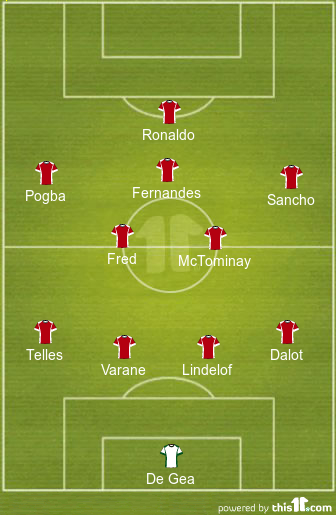