Chelsea continue their defence of the Champions League when they take on Juventus on Wednesday night. Here is the team we expect Thomas Tuchel to select

Chelsea continue their defence of the Champions League when they take on Juventus in Turin on Wednesday night. Here is the team we expect Thomas Tuchel to select for the game:

Goalkeeper: Edouard Mendy returned for the 1-0 defeat to Manchester City at the weekend after recovering from a groin injury so he should keep his place between the sticks on Wednesday with Kepa Arrizabalaga on the bench.

Defence: Tuchel is expected to make a change in defence with Thiago Silva coming back into the Chelsea team. The Brazilian should line-up alongside Andreas Christensen and Antonio Rudiger meaning Cesar Azpilicueta will move into a more advanced role.

Midfield: Azpilicueta played in the back three against City but with Reece James ruled out of the trip to Juventus due to an ankle injury that he sustained at the weekend, the Spaniard should move into the right wing-back position tomorrow night.

Ben Chilwell is pushing for a recall on the opposite flank but Marcos Alonso appears to be Tuchel’s first choice so he could keep his place with Chilwell having to settle for a place among the Chelsea substitutes once again.

The Blues have been dealt a huge blow with the news that N’Golo Kante has been ruled out of the game after testing positive for Covid but Jorginho is expected to recover from a knock to start once again in midfield.

Saul Niguez is pushing for a recall but we think Mateo Kovacic will keep his place in midfield to start alongside Jorginho with Tuchel tweaking his formation slightly to revert back to two central midfielders.

Attack: The switch will allow the Chelsea boss to bring in another attacker and Kai Havertz is expected to be recalled after being named on the bench at the weekend.

Romalu Lukaku will obviously lead the line up front and we could see Hakim Ziyech recalled to with Timo Werner making way. Christian Pulisic and Mason Mount remain out through injury. 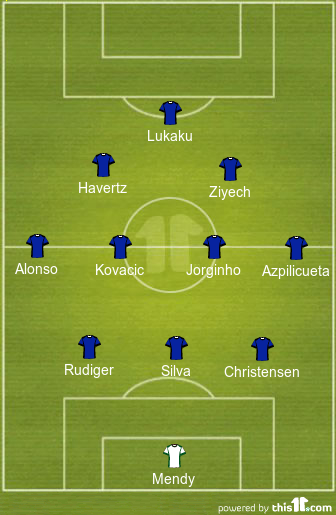