Chelsea have the opportunity to extend their advantage at the top of the Premier League when they entertain Norwich City this afternoon.

The Blues are currently holding a slender one-point lead over Liverpool in the standings, and should fancy their chances of another win today.

They will come up against a Norwich side that are winless since promotion, and are currently bottom of the standings with just two points.

Despite the injury setbacks to Romelu Lukaku (twisted ankle) and Timo Werner (hamstring), the club should be clear favourites against the Canaries.

Here is how Chelsea could line up today.

Goalkeeper: Edouard Mendy had a comfortable evening against Malmo in midweek as the Blues cruised to a 4-0 triumph in the Champion League. He has already kept 31 clean sheets in the space of just one year, and will be hoping for another quiet game.

Defence: Andreas Christensen will be beaming with confidence after bagging his maiden club goal against Malmo. He is likely to start in the middle of the back three.

Antonio Rudiger could have been rested in midweek after his recent back problem, but he played the entire 90 minutes. The German appears likely to continue. Thiago Silva could be given a breather.

Cesar Azpilicueta has impressed with his regular overlapping runs from the right wing-back position, but the Spaniard could slot in central defence to accommodate Reece James.

James has fully recovered from an ankle injury suffered last month, and we fancy him to get the nod at right wing-back with Azpilicueta dropping into the heart of the defence.

Ben Chilwell has won over the manager with standout displays in the past three games, registering two key goals. He now appears the first choice at left wing-back over Marcos Alonso.

Midfield: Thomas Tuchel got the chance to play his preferred pairing of N’Golo Kante and Jorginho in midfield against Malmo, but the former was substituted early.

Jorginho was an unused substitute in the previous league encounter at Brentford. It won’t be a surprise if Kante is rested this time around. Tuchel has been cautious with the Frenchman amid recent injuries.

This could open up a spot for Ruben Loftus-Cheek, who has been exceptional since breaking into Tuchel’s plans. He was largely left out on the bench earlier this term.

Attack: Mason Mount made his first start in nearly a month on Wednesday. He showed his class with an all-round performance after making a quick start off the blocks.

He is likely to take up the right-wing position. Callum Hudson-Odoi could slot in the opposite flank after an impressive showing in midweek that was capped with a wonderful assist.

The Blues graduate led a counter-attack from his own half before feeding the ball for Kai Havertz to score.

Havertz looks set to play in the false number nine role with Lukaku and Werner in the treatment room. The German will be full of confidence after his midweek strike.

He produced a lovely dinked finish over the goalkeeper before creating a key chance for Rudiger that contributed to the penalty scored by Jorginho to make it 4-0. 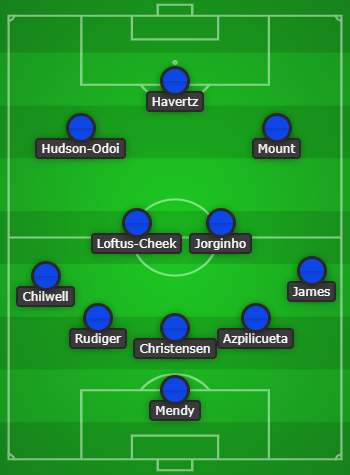