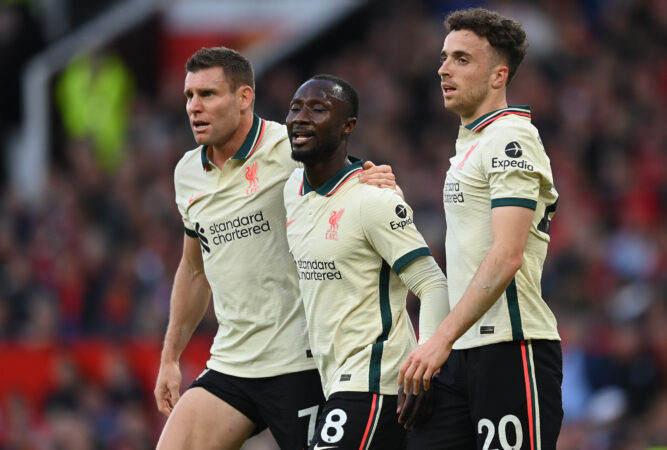 A section of Liverpool fans on Twitter heaped praise on the performance of Naby Keita during the club’s stunning 5-0 triumph over Manchester United in the Premier League.

Jurgen Klopp made a strong decision to drop Sadio Mane and Joel Matip to the bench against United, but he stood by Keita despite his mixed performance at Atletico Madrid.

The 26-year-old scored with a stunning volley against the La Liga outfit, but he still had a tough outing as he was beaten easily in the lead-up to both goals conceded (3-2 win).

Despite this, Keita got the nod over Alex Oxlade-Chamberlain and Curtis Jones at Old Trafford. He proved his worth with a quality showing from the right side of midfield.

The midfielder was offered the license to romp forward and he was a menace to the United defence with his impressive range of passing in the final third of the field.

Keita opened the scoring after just five minutes which set the theme of the game. He was denied an assist moments later as Roberto Firmino’s effort was saved by David de Gea.

The midfielder continued to excel with his decision-making in the final third, providing a key pass for Trent Alexander-Arnold, who drilled in a low cross from the right for Diogo Jota to score.

He finally turned provider in the 38th minute, feeding a cross for Mohamed Salah from the right. The Egyptian beat De Gea with a first-time shot at the near post to make it 3-0.

Keita had a wonderful outing with a goal and an assist. He also created four key chances while making four interceptions. Unfortunately, his game ended on a sour note.

A two-footed lunge from Paul Pogba before the hour mark led to him being stretchered off with a leg injury.

With his injury-plagued Reds career, it should be a cause for concern. The Guinea international produced one of his best performances in the club’s shirt and hopefully, he has not suffered a serious issue.

James Milner was also substituted with a setback early in the opening half. Fabinho and Thiago also missed the game through injuries. There appears a midfield crisis forming.

Here is how some Liverpool fans reacted to Keita’s performance. A few were concerned over his injury.

Salah, you are lost for words.

Naby Keita – lots of nonsense surrounding him this week but he was unbelievable.

We criticisize Naby Keita when he is poor let's make sure to praise him loudly when he is brilliant. Important to always be fair.

Absolutely gutted for Keita as he’s been phenomenal today.

Of course he’ll get blamed for a reckless challenge by Pogba though.

Hope Keita injury not serious. Had a goal and assist silenced the doubters.

I hope Keita is ok. Guy is slowly getting his LFC career underway, with 2 goals in 2 games & along comes Pogba with that tackle.
Henderson also found his feet. Best performance of the season. Full game control. pic.twitter.com/4QLbMgq15o