Chelsea alerted over availability of €50m-rated attacker in January – report 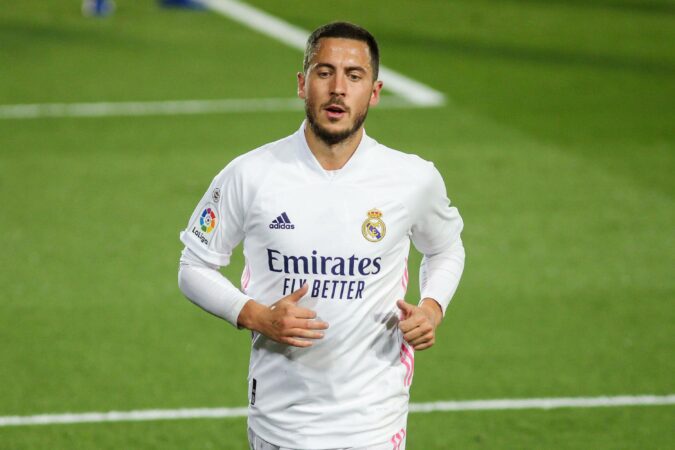 Chelsea have been alerted over the availability of Real Madrid attacker Eden Hazard during the January transfer window, ESPN reports.

The Belgium international has been with the Madrid giants for the past two-and-a-half seasons, but has failed to establish himself amid regular injuries.

He was recently an unused substitute in the El Clasico. Carlo Ancelotti explained that he currently has options that he would prefer over the 30-year-old.

It is now reported that Los Blancos are prepared to cash in on the former Blues star as they aim to recoup funds to sign Erling Haaland and Kylian Mbappe.

Hazard was purchased for an initial fee of around €100 million. Los Blancos are hopeful of recouping at least 50 per cent (€50m) of the fee through his sale.

The Blues and Newcastle United have been informed over the player’s availability, but the report claims that the level of interest from the clubs are unknown.

Hazard was a huge hit during his seven seasons with the Blues (2012 to 2019), bagging 110 goals and 92 assists from 352 appearances across all competitions.

He left for Los Blancos at the prime of his career, and it was anticipated that he would take his game to the next level and become the leader of Los Blancos’ attack.

Nothing of that sort has happened thus far. He has made just over 50 appearances for Los Blancos, and is no longer a guaranteed starter when fit and available.

The Belgian has not given any indication that he would consider a fresh challenge, but may seriously consider his options if Ancelotti continues to ignore him.

A section of Blues fans would undoubtedly welcome Hazard back with open arms, but a return does not appear worthwhile with his recent injury record.

He has suffered around 15 injuries during his two years with the Madrid giants. The playmaker has already missed more games than he did during his seven seasons with the Blues.

The training regime at Los Blancos could be a reason behind his regular muscle injuries, but it appears unlikely that the Blues will take the risk to re-sign him in the present situation.

They currently have a similar concern with Christian Pulisic, who can’t get over his injury troubles, and wouldn’t want another player spending time on the sidelines with regular niggles.