The north London club are unbeaten since the September international break, and they are currently three points adrift of the top four.

They have an excellent chance to close the gap further, but it won’t be easy against the Foxes, who have fared well against them recently.

The Gunners have won just one of their last five league meetings. The victory came in the form of a 3-1 comeback triumph at the King Power last term.

Mikel Arteta will be hoping that his team can replicate the performance on Saturday.

There will be wholesale changes from the midweek Carabao Cup fourth-round tie against Leeds United. Here is how the Gunners could line up.

Goalkeeper: Aaron Ramsdale has established himself as the number one choice in the league ahead of Bernd Leno. He has made a string of top-notch saves and has also impressed with his long-range distribution. He is expected to start between the sticks.

Defence: Ben White was substituted with a sickness bug in midweek, but Mikel Arteta was optimistic over his recovery. The England international will most likely partner Gabriel Magalhaes in central defence again.

Takehiro Tomiyasu has established himself as the regular right-back ahead of Calum Chambers and Cedric Soares, and he should return to the XI. The same has been the case with Kieran Tierney on the opposite end, but he has been absent recently with an ankle injury.

Arteta said that he was close to making his comeback in midweek, but he may not start unless he is fully fit. It won’t be a surprise if Nuno Tavares continues at left-back. The Portuguese had a superb full debut against Aston Villa last weekend where he impressed with his overlapping runs and early crosses into the box.

Midfield: Thomas Partey appears to have finally overcome his injury concerns, and appeared back to his best against Villa. He was a potent goalscoring threat from set-pieces, and opened the scoring with his maiden Gunners goal.

The Ghana international is a definite starter against the Foxes. In Granit Xhaka’s prolonged injury absence, Albert Sambi Lokonga could partner Partey once more. The 22-year-old has occasionally been prone to slow decision-making but overall, it has been a positive debut season for him.

Bukayo Saka and Emile Smith Rowe featured on the right and left side of a four-man midfield against Villa. They could have similar roles against the Foxes. The Gunners graduates could operate as wingers in attack while dropping back to their respective positions when the Foxes have possession.

Attack: Pierre-Emerick Aubameyang and Alexandre Lacazette look likely to line up together up top. Aubameyang has flourished with four goals and an assist in his last six league games. Lacazette bagged a dramatic last-gasp equaliser against Crystal Palace earlier this month before winning a penalty against Villa. Lacazette could play behind Aubameyang in a second-striker role that proved effective last weekend. 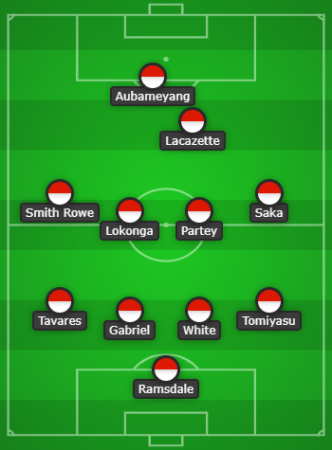