Arsenal will be aiming to return to winning ways when they host Newcastle United in Saturday’s early Premier League kick-off. Here is how they could line up

Arsenal will be aiming to return to winning ways when they host Newcastle United in Saturday’s early Premier League kick-off.

The Gunners recently went on an eight-match unbeaten run in the top-flight before the disappointing 4-0 defeat at Liverpool. It was a reality check for the young squad, who still have plenty of progress to make to compete with the best for the league title.

Arsenal are still well within the hunt for the top four with just three points separating them from London rivals West Ham United. Mikel Arteta will be hoping that his team can close the gap. The Gunners have a stellar home record against the Magpies with no defeats over the past decade.

Here is how they could line up on Saturday.

Goalkeeper: Aaron Ramsdale has been exceptional between the sticks since his Premier League debut for the club in September. He made a number of stellar saves against Liverpool which helped Arsenal avoid further humiliation. The 23-year-old is expected to start in goal.

Defence: Takehiro Tomiyasu was outpaced by Sadio Mane on a few occasions, but he fared decently with his aerial duels. He will have learned from his experience, and should continue at right-back for the tenth straight league game.

Ben White and Gabriel Magalhaes were impressive early on against the Reds, and will be eager to continue their fine run of form in central defence. At left-back, Kieran Tierney is expected to replace Nuno Tavares after his dismal outing at Anfield. The £28.8m star should make his first league appearance in five games.

Tavares has had a promising start to his Gunners career, but he had a tough time in Merseyside, gifting the Reds with the second goal with a poor backpass. The Portuguese replicated the same on a couple of more occasions, but his teammates saved his blushes.

Midfield: Thomas Partey was far from his best at Anfield, but his showing was still better than Albert Sambi Lokonga, who was dispossessed in defensive positions for the second game running. Ainsley Maitland-Niles replaced him after the hour mark last weekend. The England man could be in line for a starting role for Arsenal in central midfield against the Magpies.

Bukayo Saka and Emile Smith Rowe could not influence the Gunners’ attacking play from their wide midfield roles last weekend. However, the former did have some joy getting behind the defence. Smith Rowe was almost non-existent on the other end. The Gunners graduates will be keen to redeem themselves.

Attack: Alexandre Lacazette and Pierre-Emerick Aubameyang have played up front in each of the past four games. Arteta may stick with a two-striker partnership once more. Lacazette worked hard against the Reds with his link-up play, but Arsenal could not create clear-cut chances. 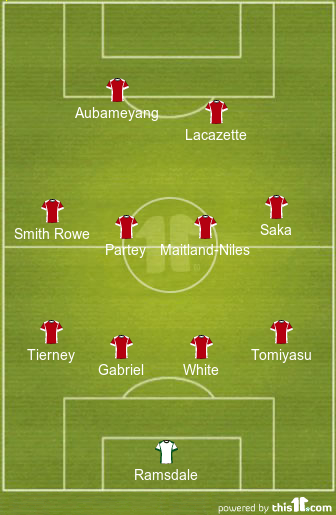