Chelsea take on West Ham United at the London Stadium on Saturday lunchtime. Here is the team Thomas Tuchel is expected to select:

Goalkeeper: Edouard Mendy will no doubt continue between the sticks tomorrow and he’ll be hoping to boost his chances of winning the Golden Glove with a clean sheet against West Ham.

Defence: Tuchel will be forced into a change in defence as Trevoh Chalobah has been ruled out of the game after picking up a hamstring injury during the win at Watford on Wednesday night.

Thiago Silva will be the man recalled after he was rested last time out. Antonio Rudiger and Andreas Christensen should keep their places in the back three so Malang Sarr will have to settle for a place on the Chelsea bench once again.

Ben Chilwell has been ruled out for several weeks with a serious knee ligament injury so Marcos Alonso will continue on the left flank. We should see a change on the right side for Chelsea as Reece James is back in contention after missing the Watford game with an ankle knock. Cesar Azpilicueta will drop out.

Midfield: N’Golo Kante is still an absentee for Chelsea as he’s working his way back from a knee complaint while the trip to West Ham also comes too soon for Mateo Kovacic.

However, Jorginho is back after being rested in midweek so he’ll be recalled in the middle of the park. Saul Niguez failed to take his chance after being substituted at half-time during the win at Watford following a poor display so he’s expected to be dropped with Ruben Loftus-Cheek keeping his place.

Attack: Chelsea are set to recall Romelu Lukaku up front as the Belgian international has built up his fitness with substitute appearances recently after recovering from injury.

Mason Mount could keep his place after scoring at Vicarage Road on Wednesday night while Hakim Ziyech may be recalled after netting the winner off the bench versus Watford.

Therefore, Kai Havertz and Christian Pulisic may have to settle for places on the bench against West Ham along with Timo Werner and Callum Hudson-Odoi. But Tuchel has plenty of attacking options at his disposal. 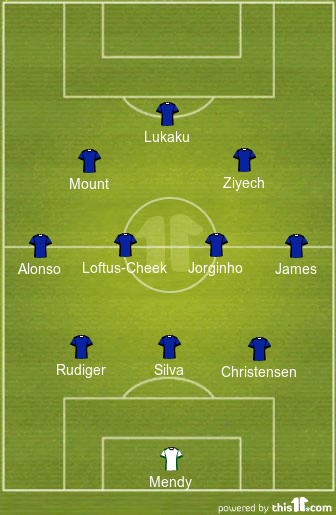