Chelsea will be looking to close the gap at the top of the table when they take on Aston Villa at Villa Park on Boxing Day. Here is the team Thomas Tuchel is expected to select:

Goalkeeper: Edouard Mendy is set to return between the sticks after being rested for the League Cup win at Brentford in midweek. Kepa will therefore drop to the bench.

Defence: Tuchel is also expected to make changes in defence with Antonio Rudiger and Thiago Silva coming back into the starting eleven after they were given a breather in midweek. Malang Sarr and Cesar Azpilicueta could make way but Trevoh Chalobah may keep his place in the Chelsea back three.

Xavier Simons made his full debut against Brentford but he’ll drop out with Reece James expected to be recalled on the right flank this weekend. Marcos Alonso should continue on the left with Ben Chilwell still unavailable for selection.

Midfield: Chelsea are expected to recall N’Golo Kante after he was rested on Wednesday night while Jorginho could also come back into the starting eleven after being on the bench in midweek.

Mateo Kovacic started against the Bees but he may have to make-do with a place among the substitutes on Sunday as he continues to work his way back to full fitness following a lengthy injury absence.

Saul Niguez has struggled to settle since arriving on loan from Atletico Madrid last summer and he’ll drop out after making a rare start in the League Cup on Wednesday evening. Ruben Loftus-Cheek remains on the sidelines with an ankle injury.

Attack: It will be all change in the Chelsea attack with youngsters Harvey Vale and Jude Soonsup-Bell both dropping out after making their full debuts against Brentford. Ross Barkley is also expected to make way after a rare run out in midweek.

Romelu Lukaku is set for a recall after returning a negative covid test. The £97m star should lead the line up front with Timo Werner and Kai Havertz both ruled out of the trip to Aston Villa this weekend.

Callum Hudson-Odoi could be back in contention after missing the Brentford game due to covid but Mason Mount is expected to start in the Chelsea attack while Christian Pulisic is also pushing for a recall.  Hakim Ziyech is ruled out with a calf injury. 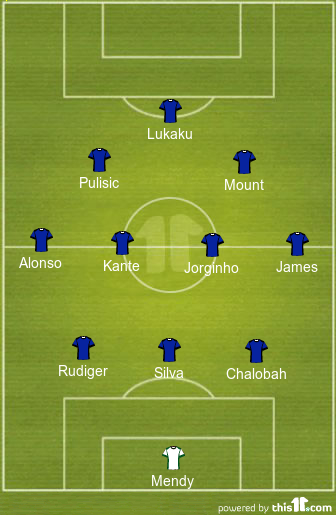