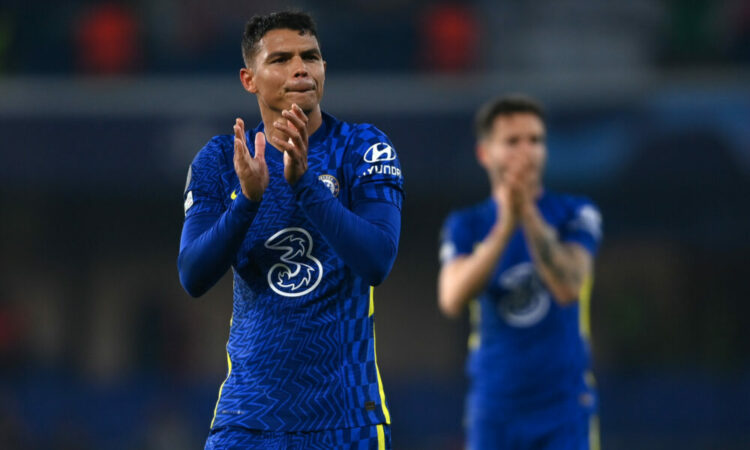 Chelsea manager Thomas Tuchel has confirmed that N’Golo Kante and Thiago Silva were substituted against Aston Villa with injuries.

The Blues picked up their first win in three Premier League matches yesterday following a 3-1 triumph over Villa away from home.

Silva returned to the starting line-up after being rested in midweek. The Brazilian played for just 53 minutes before being substituted.

The 37-year-old immediately signalled to the bench after picking up a hamstring concern. He still appeared to be moving relatively freely.

Meanwhile, Kante was taken off shortly after the hour mark. Following the game, Tuchel confirmed that both players sustained injuries.

The German expressed more concern for Kante. The midfielder suffered a ‘very painful’ knee injury in the same spot as against Juventus.

Tuchel told Chelseafc.com: “N’Golo is very painful on exactly the same spot where he had his injury versus Juventus. Thiago came off with hamstrings, hopefully he went out before it became an injury. From there we try to continue and find a new squad and strong squad on Wednesday.”

Judging by Tuchel’s comments, it is quite clear that the duo could miss the midweek encounter against Brighton & Hove Albion.

Fortunately, the Blues have sufficient cover now. Kovacic has fully recovered from a hamstring injury, and could partner Jorginho in midfield.

Andreas Christensen recently overcame a back problem. The Dane replaced Silva in the back three, and could keep his place against the Seagulls.

Chelsea are currently six points behind Manchester City for the top spot. Their second-half performance at Villa Park should delight Tuchel.

It was far from the perfect display from the Blues, but there were plenty of positives from the game, particularly in the final third of the pitch.

Callum Hudson-Odoi and Romelu Lukaku returned after a bout of coronavirus with goal scoring contributions. The latter was superb off the bench.

The Belgian bagged his first Premier League goal in three months with a superb glancing header in the box after Hudson-Odoi’s delightful cross.