Arsenal take on Manchester City at the Emirates Stadium on New Years Day. Here is the side Mikel Arteta is expected to pick:

Goalkeeper: Aaron Ramsdale had a relatively easy game against Norwich City last time out and he’ll keep his place between the sticks with Bernd Leno remaining on the bench.

Defence: Arsenal are set to be without first choice right-back Takehiro Tomiysau as he’s still in isolation following a positive covid test which ruled him out of the trip to Carrow Road on Sunday. With Cedric Soares, Calum Chambers and Ainsley Maitland-Niles also out due to covid, Ben White is expected to continue at right-back.

That means Rob Holding should keep his place alongside Gabriel at the heart of Arsenal’s back four after impressing against Norwich while Kieran Tierney will continue at left-back ahead of Nuno Tavares.

Midfield: Thomas Partey will play his final game before heading off to the African Cup of Nations so the Ghana international is set to line-up alongside Granit Xhaka once again in the middle of the park.

Albert Sambi Lokonga will be an option from the bench after making his return to the squad last weekend while Mohamed Elneny should also be named among the substitutes.

Martin Odegaard continued his superb form with another excellent performance during the 5-0 win over Norwich so the Noewegian is undroppable right now in the No.10 role.

Gabriel Martinelli was also sensational for the Gunners at Norwich with his tireless work ethic on show once again so it’s hard to see how Arteta can leave the Brazilian international out of his starting eleven.

Therefore, Emile Smith Rowe may have to settle for a place among the substitutes once again despite scoring for the fourth consecutive game off the bench last Sunday.

Pierre-Emerick Aubameyang continues to be frozen out by Arteta so it’s unlikely the Gabon hitman will feature against City. Alexandre Lacazette is enjoying a fine run of form lately so he should continue to lead the line up front. 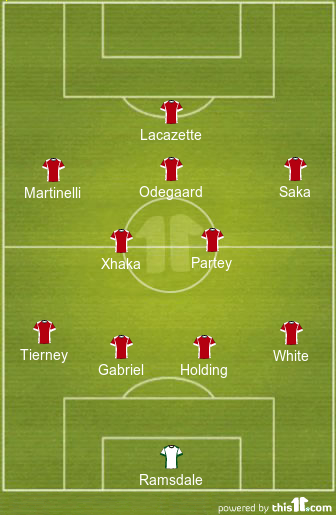