Manchester United will be looking to close in on the top four with a win over Wolves at Old Trafford on Monday night.

Here is how Ralf Rangnick could line up for the game:

Goalkeeper: David de Gea is expected to once again keep goal for United with Dean Henderson having to settle for a place among the substitutes.

Defence: Victor Lindelof may return to the squad after missing the win over Burnley last week due to covid. However, the Swedish international might have to make do with a place on the bench as Raphael Varane is expected to be recalled after being left out versus the Clarets.

Eric Bailly is the man likely to drop out as Harry Maguire should keep his place in the Man Utd defence. Rangnick may also stick with Aaron Wan-Bissaka at right-back ahead of Diogo Dalot while Luke Shaw may get the nod ahead of Alex Telles at left-back.

Fred is pushing for a recall after being named on the bench last time out so the Brazilian could replace Nemanja Matic in the middle of the park against Wolves.

Paul Pogba remains on the sidelines as he’s still working his way back from a hamstring injury but Donny van de Beek will be another option for United from the bench.

Attack: Bruno Fernandes is back in contention after serving a one-match ban and he should come straight back into the Manchester United starting eleven tomorrow night.

Jadon Sancho may keep his place in the attacking midfield positions so Mason Greenwood could be the man to make way for Fernandes.

Cristiano Ronaldo is expected to start once again after getting on the scoresheet on Thursday night while Edinson Cavani is likely to partner the Portuguese superstar up front.

That means Marcus Rashford may have to settle for a place among the substitutes. Anthony Martial remains out with a knee injury. 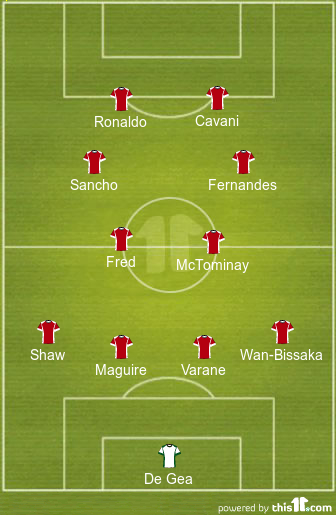