Chelsea take on Tottenham at Stamford Bridge in the first leg of their Carabao Cup semi-final on Wednesday night. Here is the team Thomas Tuchel is expected to select:

Goalkeeper: Edouard Mendy is expected to be rested with Kepa returning in goal following his penalty shoot-out heroics in the previous rounds of the League Cup.

Defence: Tuchel has problems in defence as Trevoh Chalobah has been ruled out with a hamstring injury that he picked up at the weekend while Andreas Christensen is also a major doubt with a back issue.

Therefore, Malang Sarr could be handed a recall to line-up in the Chelsea back three against Tottenham. Antonio Rudiger is expected to keep his place while Thiago Silva could start and he’ll be in high spirits after signing a new one-year contract at the club.

Midfield: Chelsea will still be without Ben Chilwell as he’s out for the rest of the season with a serious knee injury while Reece James will also miss out against Tottenham due to a thigh injury.

Marcos Alonso is expected to keep his place in the left wing-back position but we could see a change on the right with Cesar Azpilicueta handed a rest. Callum Hudson-Odoi could therefore come in to the starting eleven.

N’Golo Kante is likely to be given a breather as Tuchel protects his fitness so Jorginho is expected to be recalled after being benched for the draw with Liverpool at the weekend. Saul Niguez is pushing for a rare start but we could see Mateo Kovacic keeping his place and Saul given a run out in the FA Cup on Saturday.

Ruben Loftus-Cheek remains out with an ankle injury but Ross Barkley is another option for Tuchel in midfield.

Attack: Chelsea are set to welcome Romelu Lukaku back into the squad after he apologised for a recent interview where he questioned his future at the club. The Belgian hitman is tipped to start up front with Kai Havertz making way.

Timo Werner is back in contention after returning to training following covid but the German will have to settle for a place among the Chelsea substitutes against Tottenham.

Christian Pulisic should keep his place after scoring a fine goal at the weekend but we may see Mason Mount given a rest with Hakim Ziyech coming in to the attack. 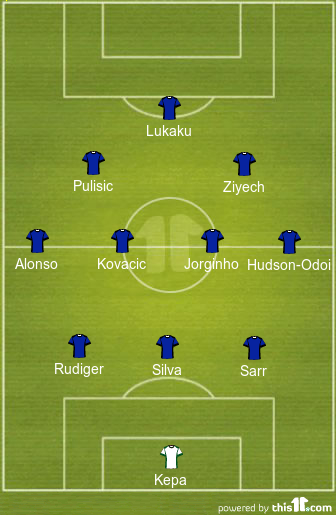