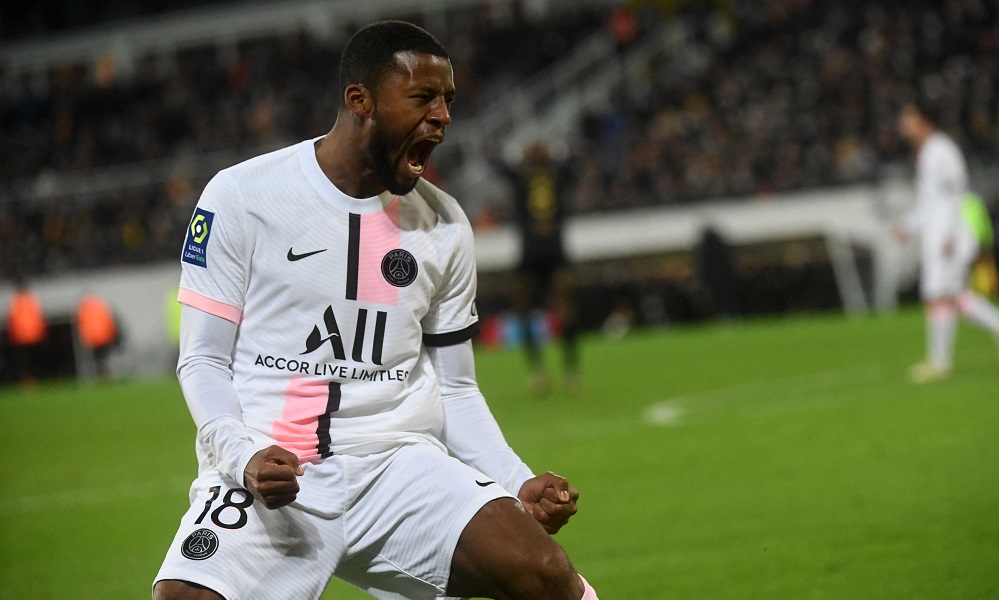 Paris Saint-Germain midfielder Georginio Wijnaldum is a boyhood Arsenal fan and would be open to joining the Gunners this month, according to Sky Sports reporter Kaveh Solhekol.

Mikel Arteta has made no secret of his desire to strengthen his squad this month and the Spaniard is in the market for a new central midfielder as Arsenal are down to the bare bones in the middle of the park.

Thomas Partey and Mohamed Elneny are away on international duty at the African Cup of Nations while Ainsley Maitland-Niles has been allowed to join AS Roma on loan until the end of the season.

Granit Xhaka is on the sidelines with covid so Arteta was forced to hand 18-year-old Charlie Patino his full debut alongside Albert Sambi Lokonga in midfield during Arsenal’s defeat to Nottingham Forest last weekend.

The Gunners need reinforcements if they’re to maintain their push for a top four finish this season and Wijnaldum is one of several names to be strongly linked with a move to the Emirates Stadium this month.

The Dutch international has struggled to establish himself as a first team regular under Mauricio Pochettino since joining Paris Saint-Germain on a free transfer from Liverpool last summer.

Close to his heart

"I think he would be more than happy to play for Arsenal one day." @SkyKaveh gives an update on Georginio Wijnaldum, with talk of the midfielder being open to a return to the Premier League 🔊 pic.twitter.com/Y1vE5gb0jg

If his situation doesn’t improve quickly, Sky Sports reporter Solhekol claims Wijnaldum would be open to joining Arsenal as he’s a boyhood fan of the Gunners. Solhekol said:

“I’ve been told Arsenal are one of his favourite clubs. Somebody quite close to me said that when he was growing up that he was an Arsenal supporter.

“So I think that he would be more than happy to play for Arsenal one day.

“But they are definitely, I’ve been told, a club that are close to his heart.”

Wijnaldum has only managed 10 starts in all competitions since joining PSG last summer and he looks to be a shadow of the player he was during an excellent five-year spell at Liverpool.

The 31-year-old played 237 times for the Merseysiders after joining from Newcastle in 2016 and played a key role in helping Jurgen Klopp’s side win the Champions League and Premier League.

The Dutchman wouldn’t need any time to adjust to English football and has plenty of experience so he’d be a terrific addition to the Arsenal squad if they were able to lure him to north London this month.